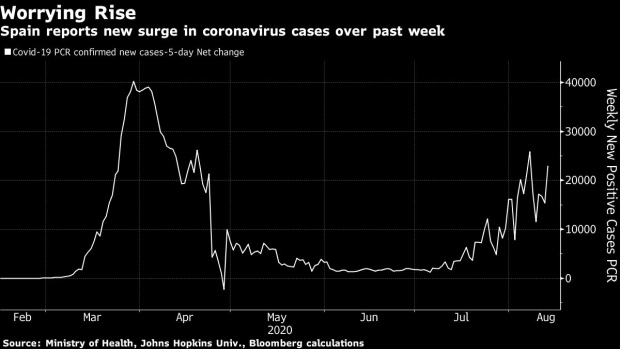 A pedestrian wearing a protective face mask walks along a side street lined with shuttered bars and restaurants in Madrid, Spain, on Thursday, May 7, 2020. Italy and Spain, the two European countries most severely hit by the coronavirus, are suffering even deeper slumps after record contractions in the first quarter. , Bloomberg

(Bloomberg) -- The number of Covid-19 infections in Spain continued to rise, prompting warnings from business leaders about the cost to the economy if new lockdown measures have to be imposed.

New cases jumped by 2,935 on Thursday compared with 1,690 in the previous 24-hour period, the health ministry said late Thursday. It was the highest tally since at least May 25 when the government changed its methodology for reporting data.

CEOE, Spain’s main business lobby, on Thursday warned that any second lockdown would have catastrophic consequences and urged the government to promote the use of a new app developed by the Economy Ministry to trace cases of Covid-19.

“The Spanish economy is in a situation where it can’t handle an outbreak similar to the one in March that would mean a new lockdown with the subsequent paralysis of activity,” the chamber said in the statement.

Fernando Simon, the head of Spain’s medical emergency response center, said on Thursday that, while the government will do what’s needed to rein in the virus, he had no knowledge of any plans for further lockdown orders.

Spain applied one of the strictest restrictions on mobility in Europe when the virus first arrived in March. Its impact was reflected in data that showed economy shrank by 18.5% in the second quarter, the deepest contraction by a European Union country.

Last month, the U.K. imposed a two-week quarantine on visitors back from Spain, hitting tourism, a key sector of the economy, at the height of its busiest season.

Still, while cases are rising, the number of deaths are far from the peak levels seen in early April, when more than 900 people a day were dying from the virus. The government reported 70 deaths in the past week, up from 65 on Wednesday.