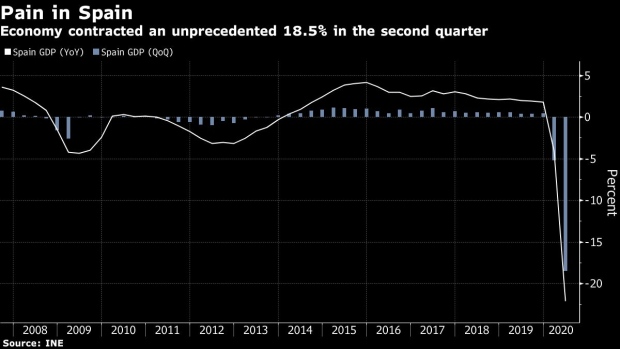 A pedestrian wearing a protective face mask passes a shuttered business in Madrid, Spain, on Wednesday, July 29, 2020. In Spain, new daily cases hit almost 1,000 last week, driven by local spikes in areas such as Aragon and Catalonia, where nightclubs are now being closed and curfews applied on bars. , Bloomberg

(Bloomberg) -- Spain’s economy shrank more than forecast in the second quarter, leaving it with a long-haul recovery that’s become even more complicated because of additional headwinds facing the tourism industry.

The record 18.5% drop in output -- led by plunges in consumer spending and investment -- is the deepest reported so far in Europe, where restrictions to control the coronavirus battered businesses and households. Economists had expected a contraction of 16.6% in output.

The virus fallout has been widespread and figures Thursday showed Germany, Europe’s largest economy, shrank 10% in the second quarter. The threat of job cuts across the continent and a renewed wave of infections mean a recent rebound in activity may not be sustained. The euro-area probably shrank about 12% in the period, according to a Bloomberg survey.

Spain had one of the earliest and deadliest outbreaks of the coronavirus in Europe along with Italy, and the government responded with a strict lockdown. Even with huge monetary stimulus by the European Central Bank, and an historic 750 billion-euro ($893 billion) European Union recovery fund, the country is facing a slow recovery.

The Spanish economy is heavily reliant on tourism, a sector that’s been slammed by the pandemic. A bad summer season took a turn for the worse when the U.K. announced last weekend that holidaymakers returning from Spain would have to quarantine because of an uptick in coronavirus cases in regions such as Catalonia.

The Spanish economy has also been particularly affected by the crisis because of the relatively small size of its companies, which leaves them more vulnerable and less capable of effectively responding to the shock. Business associations expect tens of thousands of small and medium-sized companies to go bankrupt before the end of the year.

Spain’s statistics agency warned of the difficulty in measuring economic output in the second quarter, when many Spaniards were in the depths of the country’s strict confinement. Revisions in the future could be greater than normal, it said.