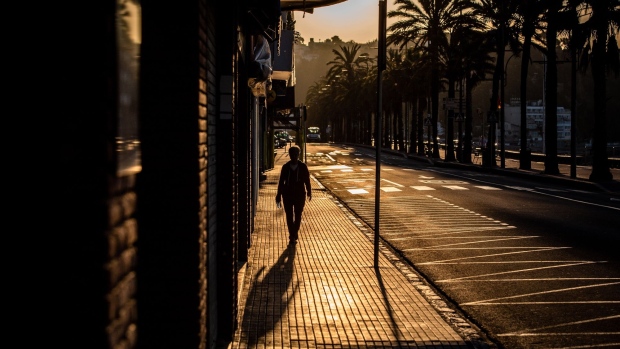 A pedestrian walks along the street at sunrise in Lloret de Mar, Spain, on Tuesday, May 19, 2020. The coronavirus outbreak dealt an unprecedented blow to tourism in Europe, hammering sales and putting millions of jobs at risk in a sector that accounts for about 10% of output. Photographer: Angel Garcia/Bloomberg , Bloomberg

With public coffers buoyed by money from the European Union, the Socialist-led government will recruit 30,445 new public-sector employees this year, an 8.5% increase from 2020. The hiring comes alongside other aid programs to bridge social inequalities that have widened in the crisis, according to Economy Minister Nadia Calvino.

“It’s necessary to continue extending aid to the most vulnerable groups,” Calvino said Tuesday at a press conference in Madrid.

Spain, which last year suffered the deepest contraction in the euro area, is set to be one of the biggest recipients of EU recovery funds. The money is aimed at helping the country bounce back and close some of the longstanding economic gaps with its wealthier northern neighbors.

The government expects Spain’s unemployment rate to be 15.2% at the end of the year, Calvino said. Even before the pandemic, the country had one of the developed world’s highest rates of joblessness.

Spain expects a slight uptick in expansion next year, projecting 2022 growth of 7% -- in line with its April estimate. For 2021, the government stuck to its growth projection of 6.5% -- higher than the 5.9% estimated by economists surveyed by Bloomberg.

Spain will maintain its 2022 spending ceiling, or maximum state outlays, compared to the previous year at 196 billion euros ($232 billion). That figure includes some of the nearly 70 billion euros in grants that Madrid will receive from Brussels in the coming years.

Central-government expenditures surged 54% last year as Madrid spent heavily on a furlough plan to protect jobs and on a loan-guarantee program that kept credit flowing to many small- and medium-sized businesses.

Setting the spending ceiling is a first step to get the 2022 budget through parliament, where Sanchez’s minority government is set to face a battle to win approval.

The government maintained its budget deficit forecasts for this year and next at 8.4% of gross domestic product and 5%, respectively. Last year, Spain reported a budget deficit of 11%. The EU has suspended requirements that national governments meet deficit and debt targets through 2023.

Sanchez’s budget plan is aimed at “consolidating the economic recovery and shoring up the welfare state, and it will be key to expand the middle class,” Budget Minister Maria Jesus Montero said at the press conference.