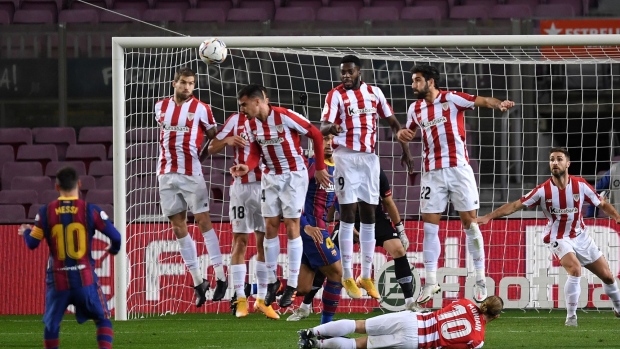 The private equity firm’s investment values La Liga at about 24.3 billion euros, according to a statement Wednesday, and comes at a crucial time for the league, which like others around Europe has seen finances badly hurt by the impact of Covid-19.

Stadium closures and rebates to broadcasters during the pandemic combined to drag La Liga revenue down 8% to 3.1 billion euros in the 2019/2020 season, according to Deloitte’s latest annual review of the sport, with lockdowns having extended into the more recent campaign.

That’s having a big impact on clubs like FC Barcelona and Real Madrid CF, known for spending often sky-high sums to attract and keep the world’s best players. Marquee signings have been conspicuous by their absence in the current transfer window and in July, Argentinian Messi moved closer to signing a new contract at Barcelona with a 50% pay cut.

Both Barcelona and Real Madrid earlier this year sought to boost and safeguard future revenue by signing up to a new Super League of Europe’s top clubs, only to see those proposals disintegrate quickly in the face of fierce opposition from fans and politicians.

For CVC, the investment is similar to one it’s been trying to make in Italy. The firm partnered with Advent International and Italy’s FSI to agree the purchase of a 10% stake in the media company of Italian soccer league Serie A for about 1.7 billion euros, only to see the deal hit a snag when some clubs raised concerns about its terms.

The Spain transaction will see the creation of a new company housing all of La Liga’s businesses, subsidiaries and join ventures, in which CVC will hold a stake of about 10%, according to the statement.

Established in the 1980s by a group of venture capitalists including Steve Koltes, Donald Mackenzie and Rolly van Rappard, CVC is one of the world’s best-known private equity houses. It oversees about $163 billion in committed capital, according to its website. The firm has a strong sports background, having invested in everything from international rugby competitions to Formula 1 motor racing.