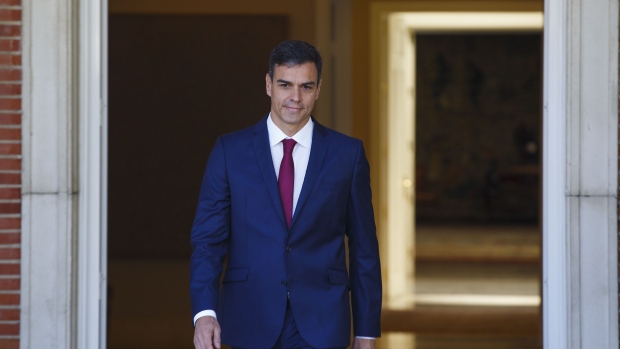 (Bloomberg) -- Spanish Prime Minister Pedro Sanchez boosted investments in the restive region of Catalonia to secure support for his budget and extend his term as premier.

The Socialist government aims to funnel 2.25 billion euros ($2.6 billion), or 18.5 percent of total state spending on infrastructure and other investments, to Catalonia, Budget Minister Maria Jesus Montero said Monday. That’s an increase from the 13.1 percent Sanchez’s conservative predecessor dedicated to Catalonia in 2018. The increase is an attempt to woo Catalan lawmakers, whose votes are essential for Sanchez to pass his budget.

“The budget is great for Catalonia,” and for the rest of Spain, Montero said during a news conference in Madrid on Monday, after laying out the broad outlines on Friday. Lawmakers are expected to start debating the 2019 budget plan in mid-February.

Catalan lawmakers have said the boost merely represents their region’s fair share of investment spending considering it’s one of the most populous areas in Spain and they’ve said they don’t see it as a convincing incentive to support Sanchez’s budget bid. That leaves Sanchez’s spending plan facing an uncertain future.

Sanchez is clambering to hold on to power after he gained the premiership in an unexpectedly successful no-confidence vote against his conservative predecessor Mariano Rajoy in June.

The surprise win was a vindication for the 46-year-old who had been politically ostracized from his Socialist Party. But it’s been a slog for Sanchez to approve legislation because he only has 85 of 350-seats in the lower house of parliament.

Now, Sanchez needs to pass a 2019 spending plan for Spain or he will face growing pressure to call snap elections in the coming months, cutting short his four-year term.

The government also aims to increase total investment in the southern region of Andalusia, where the Socialists were voted out of office late last year. He’s pledged 17.5 percent of total investment to Andalusia.

The spending boost in the regions is based on what the government expects to be a jump in revenue based on solid economic growth and higher taxes on companies and top earners. While some economists have said the revenue projections are optimistic, Budget Minister Montero said the spending plan is based on moderate growth expectations and is reasonable.

To contact the reporter on this story: Jeannette Neumann in Madrid at jneumann25@bloomberg.net

To contact the editors responsible for this story: Fergal O'Brien at fobrien@bloomberg.net, Kevin Costelloe, Andrew Atkinson