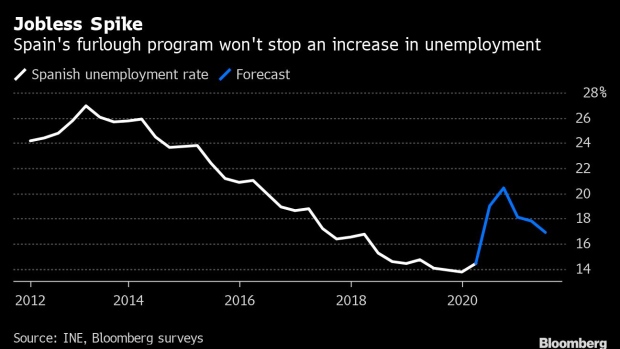 (Bloomberg) -- An average of 178,000 workers have been exiting Spain’s furlough program every week to return to their jobs, a sign that the economic recovery is slowly gathering pace in a country that’s expected to suffer one of Europe’s deepest recessions this year.

The daily exodus has accelerated as authorities gradually lifted a strict nationwide lockdown that crippled Europe’s fourth-largest economy. There were around 1.75 million workers in the furlough scheme as of July 1, Social Security Minister Jose Luis Escriva said, a decline of almost 50% from the 3.4 million enrolled at the height of Spain’s confinement at the end of April.

On average, the number has been falling by about 5% each week since then, said the minister, a former official at the European Central Bank and the Bank for International Settlements. That’s a faster rate than countries such as France and Belgium, according to data compiled by his ministry, which oversees the scheme.

“It’s a very strong pace of reactivation,” Escriva said in an interview on Thursday.

Furloughed Workers in Germany Are Starting to Return Full Time

A potential explanation is the design of Spain’s program, which has a financial incentive for employers to bring furloughed workers back. The state covers a greater portion of employer contributions for those who have been reincorporated than for those who remain suspended.

“In the absence of alternative explanations, that’s a differential element in the Spanish system,” Escriva said.

“In the labor market, it’s going somewhat better than we expected on the supply side,” Escriva said.

Demand from consumers, however, remains weak. “One of the unknowns is the savings rate,” said the minister, who also served as head of Spain’s budget watchdog Airef and as chief economist of Spanish lender BBVA.

Consumers in Spain and elsewhere in Europe accumulated savings during confinement and have continued to hold on to cash amid uncertainty. It’s unclear how much of those saving they will spend –- and when.

The minister expects employees to continue to exit the scheme in the coming weeks but said the pace is uncertain.

Workers in rubber, plastic and motor vehicle production, as well as building construction, are among those who are returning to their jobs in the greatest numbers, Social Security Ministry data shows. Industries including hospitality and travel have the highest portion of employees still registered in the aid program.

A swift return to work is particularly important for Spain’s long-troubled labor market. The country already had one of the developed world’s highest unemployment rates when the pandemic hit because of deep-seated problems, such as employers’ over-reliance on precarious temporary contracts and a large pool of unskilled workers, many of whom stay put in regions with high joblessness.

The Bank of Spain expects the unemployment rate to spike as high as 24% this year in a worst-case-scenario and the institution’s economists don’t see it falling below 17% for at least two years.

Spain and other European countries responded to the coronavirus crisis by swiftly expanding existing furlough programs to ensure the greatest number of workers would continue to receive at least a portion of their salaries during lockdown.

With about 50 million workers across Europe enrolled in the plans at one point, that helped to limit a surge in joblessness.

Spain’s government reached an agreement with unions and business leaders last week to extend its scheme –- known as ERTE in Spanish -- through Sept. 30. Some particularly hard-hit industries such as tourism are already calling for an additional extension.

For those companies that have reincorporated some of their staff, Escriva and his colleagues designed a plan that incentivizes firms to bring on even more workers.

Under the extended program, the state covers 60% of employers’ contributions from July through September for reincorporated workers. That compares to 35% for those who remain furloughed.“Incentives work much better than strict regulations,” Escriva said. “We are trying to implement programs with well-designed incentives.”