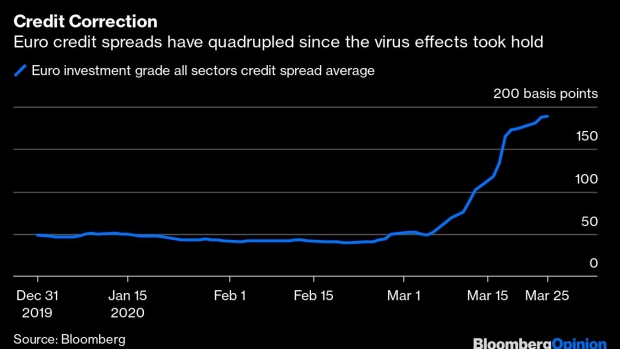 (Bloomberg Opinion) -- Nothing says funding is not a problem during this crisis than a 10 billion-euro ($11 billion) debt issue. Spain, in a state of emergency because of the coronavirus, achieved this on Tuesday with a seven-year bond sale that attracted more than 36 billion euros of orders.

The country was one of 11 high-grade borrowers testing the waters in what was the busiest day of the month for bond sales and the fourth-busiest of the year. This week’s volumes have already surpassed the total of the first three weeks of March, when the outbreak really suppressed supply. Wednesday is set to be even bigger.

Raising such a jumbo deal did mean Spain had to offer a yield that was 18 basis points higher than an existing, slightly shorter seven-year bond. Its last syndicated issue, earlier this year, came with a lower yield than its existing debt. However, the world has changed profoundly and issuers have to be prepared to dangle a carrot to entice investor demand. In the circumstances, this wasn’t much of a premium for investors.

A similar phenomenon was also evident for the European Investment Bank, whose three-year bond deal came at an 11 basis-point premium to its existing equivalent. Likewise, premiums were in evidence Monday for new deals from the German States of Bavaria and Saxony-Anhalt. Though, again, they weren’t huge, which shows how desperate investors are to find somewhere to put their money.

Corporate deals are making a comeback too: Unilever NV and Engie SA last week followed the trend for higher yields. Company issuance has seen the biggest decline in the bond market this year, unsurprisingly give the business shutdowns, running nearly 20% behind last year's pace. Coca Cola European Partners, Sanofi and Nestle SA all came to the market with multi-tranche issues on Tuesday, illustrating the improvement in conditions. Heineken NV, Danaher Corp. and Carrefour SA were doing benchmark euro deals on Wednesday.

The European Central Bank can breathe a bit easier as its 1 trillion euros of quantitative easing planned for the rest of this year is starting to take effect. As there will be considerable emphasis on its corporate sector purchasing program, many of the new investment grade deals should benefit from being scooped up by the ECB, if they’re from Europe-based issuing entities .

Wednesday has also seen the return of major banks with Lloyds Banking Group Plc, HSBC Holdings Plc, and Goldman Sachs Group Inc. all bringing euro deals. Credit spreads (the yield on corporate debt relative to sovereign benchmarks) have ballooned since late February, offering better returns for investors than government bonds if they have cash to put to work. Those spreads will start to narrow, but the virus has created a new paradigm, whereby a decent new-issue premium is essential to a successful deal.

Normality is returning to European debt capital markets, but the heady days of super-tight credit spreads and incredibly low non-core government bond yields look to be over.