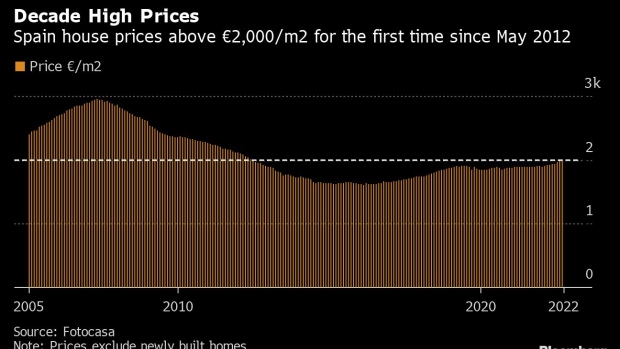 A pro Spanish flag hangs from the balcony of a residential apartment block in Barcelona, Spain, on Thursday, Oct. 5, 2017. Catalan lenders such as CaixaBank SA and Banco Sabadell SA -- which have spent years seeking to reduce political risk through expansion -- have once again been pulled into the region’s volatile politics following Catalonia’s threat of unilateral independence. , Bloomberg

(Bloomberg) -- The average asking price for Spanish homes rose to €2,011 per square metre in September, the highest level since May 2012, as buyers look to make purchases before further increases in mortgage rates.

Prices climbed 6.3% compared to the same month a year earlier, the biggest annual increase since April 2019, according to figures published by property website Fotocasa yesterday.

“It has been three and a half years since we’ve seen such large year-on-year increases,”, said Maria Matos Director of studies at Fotocasa. “This is the reflection of an increasingly reduced supply and a hasty purchase demand trying to avoid the harshness of the rate hike in the second half of the year.”

The number of home sale transactions in August increased 7.8% from a year earlier, while the number of mortgages for home purchases rose 13% from the previous year, data published in a separate release from the General Council of Notaries showed today.