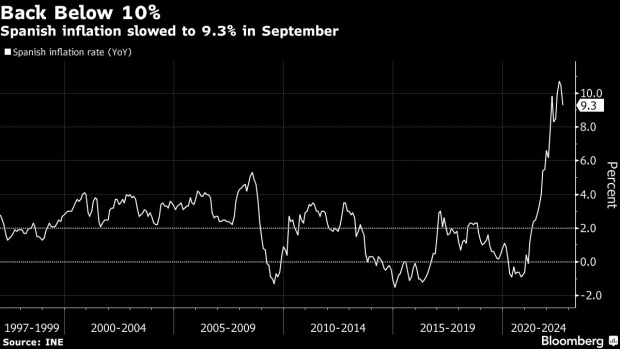 A customer picks fresh green beans from a display outside a grocery store in Madrid, Spain on Thursday, Sept. 22, 2022. Spanish Prime Minister Pedro Sanchez called on local grocery retailers to restrain price increases on food, as his government continues to seek ways to control the worst cost of living crisis in decades. Photographer: Manaure Quintero/Bloomberg , Bloomberg

European Union-harmonized consumer prices rose 9.3% from a year ago in September, down from August’s 10.5% advance, the statistics institute said Thursday. That’s well below the 10% median estimate in a Bloomberg survey of economists.

The slowdown was driven by declines in electricity, transport and fuel costs. A gauge of underlying prices that excludes volatile items like energy and food also defied expectations by dipping to 6.2%.

The data may offer some respite to the European Central Bank, which has begun lifting interest rates for the first time in more than a decade to tackle the fastest inflation since the euro was introduced.

Even so, the continent’s top economy, Germany, will release figures later Thursday that are expected to show a jump beyond 10% after temporary government-aid measures ended. The euro-zone is also likely to report another record on Friday.

In Spain, the retreat in inflation may not be rapid.

“The figure indicates that we’re facing the beginning of a decline, which, however, will be very slow and with occasional setbacks,” said Raymond Torres, head of macroeconomic analysis at the Funcas think-tank in Madrid. “The moderate decline in the core reading reflects that.”

Indeed, soaring prices continue to weigh on activity in the euro zone’s fourth-biggest economy. The central bank is poised to slash its growth outlook and lift its inflation projections, which are due next week, according to Governor Pablo Hernandez de Cos.

Sinking in opinion polls, Prime Minister Pedro Sanchez is considering raising taxes on the richest 1% to pay for more than €30 billion euros ($28.8 billion) of aid to households and companies. His party is also proposing a new levy on energy firms and banks.

(Updates with economist in seventh paragraph.)