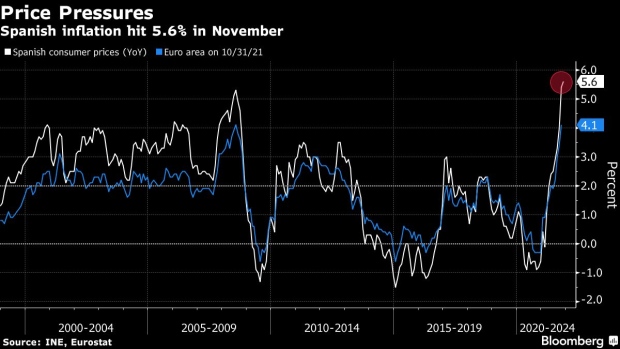 Spanish inflation accelerated to the fastest in nearly three decades on rising food prices, underscoring the lingering consequences of supply bottlenecks across the continent.

Consumer prices jumped 5.6% in November, national data released Monday showed -- the highest since September 1992 -- due to an increase food and fuel prices. The European Union-harmonized measure also came in at that level, matching the median forecast in a Bloomberg survey.

The figure gives an early look at European pressures that are already weighing on the European Central Bank. Germany’s reading is due later on Monday, with data from France, Italy and the euro area coming the following day.

The Bank of Spain saw inflation peaking in November on surging energy costs before easing back below the ECB’s 2% target next year, its chief economist Oscar Arce said in September.