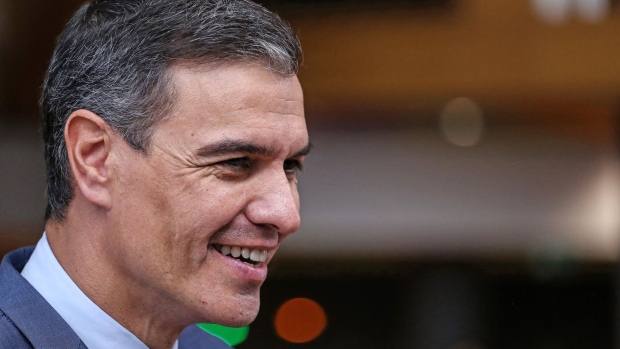 The budget, with a record spending cap of €198.2 billion ($207 billion), was approved by a majority with 187 votes on Thursday and next heads to the Senate for final approval. The widely expected outcome contrasts with the difficulties Sanchez and his opposition predecessor had passing full budgets between 2016 and 2019.

Governing a minority coalition with far-left Unidas Podemos, Sanchez has had to repeatedly rely on an array of smaller regional parties to pass legislation. That alliance is expected to approve a windfall tax on banks and energy companies later on Thursday.

Later in the evening, a majority of lawmakers also backed two-year windfall taxes on revenues from energy firms and banks. The taxes are expected to become effective in January, once approved by the Senate.

Sanchez, who’s expected to run for re-election in 2023, has put in place some of Europe’s strongest tax and energy price measures, costing more than €35 billion, in an effort to ease the cost-of-living crisis.

His government could spend an extra €10 billion in 2023 to extend some of the relief measures, according to an alternative budget proposal sent to the European Commission in October.

The government expects the spending plan to underpin an economic expansion of 2.1% in 2023, above growth estimates for most major European economies and also higher than the 1.4% increase predicted by the Bank of Spain.

Next year’s budget will increase social spending by 11% to a record €266.7 billion. The government will bolster pensions by around 8.5% in 2023 to match inflation, and increase civil servant wages by as much as 3.5%.

The budget deficit is expected to ease to 3.9% of gross domestic product next year from an estimated 5% gap in 2022.