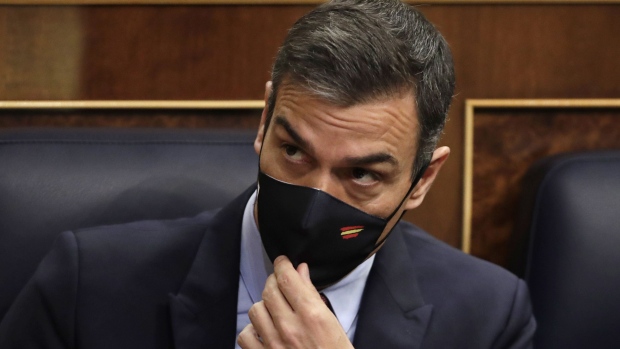 (Bloomberg) -- Prime Minister Pedro Sanchez was accused of seeking to abolish the Spanish monarchy, undermining the rule of law and leading an illegitimate government as a two-day no-confidence debate got under way in Madrid on Wednesday.

The motion is set to be comfortably defeated because the nationalist group Vox, which proposed it, has failed to rally much support among other parties. But the event will put the growing bitterness in Spanish politics on full public display.

“Pedro Sanchez’s government is the worst government in 80 years of history,” Santiago Abascal, Vox’s leader and its candidate for prime minister, said as he opened his speech. “It has handled the coronavirus pandemic worse than any government in the world.”

For Vox and its right-wing supporters, Sanchez’s cardinal sin was lining up with regional parties, including Catalan separatists, to claim a second term at the start of the year.

But the political resentment is dragging in an increasing range of topics from the management of the coronavirus to immigration.

Unlike in most countries, a no-confidence vote under Spanish parliamentary rules require the opposition to nominate an alternative candidate, making it harder for opponents to rally support.

Since the restoration of Spanish democracy in 1978, the only successful vote was brought by Sanchez in 2018, leading to the removal of conservative Mariano Rajoy. Vox has 52 lawmakers and needs 176 votes to win.