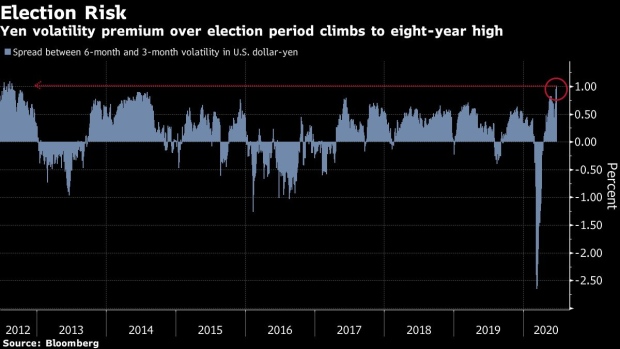 A voter casts a ballot at a polling location. Photographer: Luke Sharrett/Bloomberg , Bloomberg

(Bloomberg) -- Traders in the $6.6 trillion-a-day global currency market are starting to contemplate the unthinkable: The possibility that the U.S. presidential election produces no clear winner, leading to protracted uncertainty.

A measure of volatility in the yen -- a traditional safe haven -- shows a steep jump in price movement around election day that persists into 2021, while options contracts for both November and December are pricing in a premium versus October. That contrasts with the run-up to the 2016 election, when gauges of turmoil reflected only a temporary minor uptick in volatility as investors overlooked the likelihood of a Trump presidency, or any controversy surrounding the results -- leaving them painfully exposed to those events.

Not this time. Investors are concerned the election could spill into late November due to recounts and court challenges, according to Greg Anderson, Bank of Montreal’s global head of foreign-exchange strategy. While it’s impossible to disentangle the impact of fears about the coronavirus or the economy on expectations for price swings later this year, the extra political uncertainty has helped lift the premium on dollar-yen options for just after the November elections to an eight year-high versus shorter-term counterparts.

Investors will “have to consider how the FX market would react to a protracted phase of uncertainty if the outcome was unclear,” said Ned Rumpeltin, European head of foreign-exchange strategy at Toronto-Dominion Bank.

The prospects of a delay are a reminder of the 2000 election match-up between Republican nominee George Bush and Democratic candidate Al Gore, when a recount dispute fueled a month-long legal fight. It was a wake-up call for traders, who’d seen the options premium remain subdued throughout the vote and suddenly had to price in political uncertainty.

This time around they are already gearing up for an impasse. Polls are showing Donald Trump lagging Democratic nominee Joe Biden in key states. And the president has already questioned the validity of voting by mail, tweeting on Monday that “millions of mail-in ballots will be printed by foreign countries” and that the election will be “rigged” against him if voting by mail persists.

While those claims were made without offering evidence, more Americans are requesting to vote by mail, and that could complicate the tallying process. In what could be a hint of things to come, New York State’s election board said it won’t begin counting votes in Tuesday’s Democratic primary until July 1, so that it can double-check county records. The nation’s fourth-most populous state has seen a 10-fold increase in requests for absentee ballots.

No wonder then that traders are racing to take cover. Implied volatilities for this year’s Election Day are as elevated as they were during the height of the turmoil seen in mid-March, at over 30%. Four years back, overnight volatility in the dollar-yen pair spiked past 50% the night election results were being tallied.

The sentiment has also been reflected in the equity market with options investors piling into hedges against losses around the Nov. 3 voting period.

There’s plenty at stake. The pandemic has left more than 20 million Americans out of work. Meanwhile, the biggest wave of civil rights protests in 50 years has sent people flooding into the streets. And simmering in the background, U.S.-China tensions are once again heating up, while there’s risk that the virus could intensify again as the election approaches.

For investors across asset classes, there may be no better place to express a view on the U.S. outlook months down the road than the currency market, which offers a way to bet on America’s prospects relative to practically every other country.

Olivier Korber, FX and derivatives strategist at Societe Generale SA, suggests watching the options spread between the dollar-yuan and dollar-yen currency pairs as one way to track investors’ perception of the Trump-Biden match-up. These pairs capture global risk sentiment, geopolitical tensions and trade relations, he said.

“Past elections did not have such geopolitical implications” given Trump’s actions on trade and tariffs, Korber said. “Compared to past elections, the economic agenda of the two candidates will matter more than ever because 2020 will be a recession year.”

In the view of JPMorgan Chase & Co. strategists including Paul Meggyesi, investors should buy a six-month dollar-yen versus dollar-franc correlation swap to take advantage of an increase in implied volatility around that time. In general, as volatility increases, correlations usually follow.

“Economic uncertainty is likely to be compounded by political uncertainty,” they said.