The speculative frenzy that’s gripped a host of left-for-dead retail stocks spilled into the crypto world Friday, with Bitcoin surging as much as 16 per cent.

The digital token rallied overnight after Elon Musk tweeted “#bitcoin” to his legions of followers and day traders were restricted from transacting some of their favorite stocks. It had plunged from a record earlier this month as day traders sought fatter returns in stocks like GameStop Corp. that caught the attention of members in Reddit’s WallStreetBets forum. 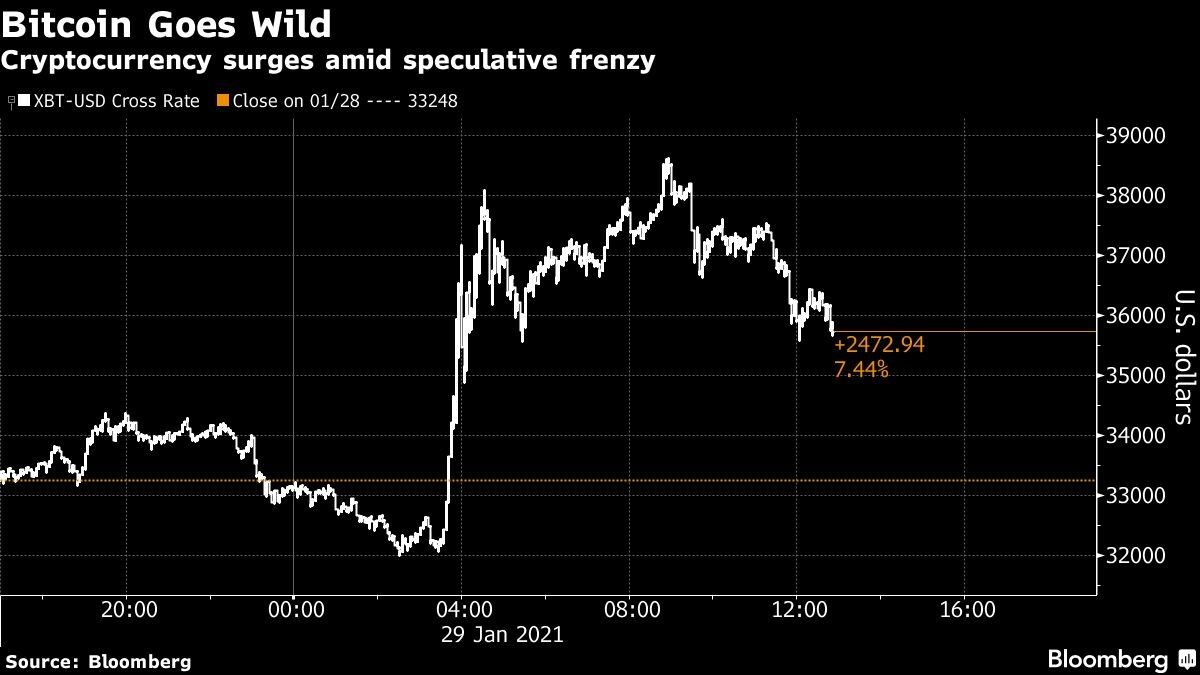 Bitcoin surge to as high as US$38,627 before paring gains while U.S. equity markets dropped into the red. It had reached a record of almost US$42,000 on Jan. 8.

The cryptocurrency is no stranger to bouts of speculative mania. It closed 2020 on a 200 per cent tear over three months as the Wall Street establishment showed increased interest in it. But that move paled next to the returns notched by the WSB crowd, where day traders targeted heavily shorted stocks and used options to spark gains that top 900 per cent in some cases.

On Thursday, that furor attracted the attention of Washington and regulators, leading online brokerages to restrict trading in certain stocks and options. Robinhood Markets, the brokerage that ushered in the no-fee trading structure that enlivened the retail scene, requires increased margin to trade some of the most popular stocks and on Friday limited transactions in Bitcoin and other digital tokens that had joined the party. That did little to temper demand for an asset that has long been the darling of the online trading crowd.

“I would imagine that the Venn diagram of people who bought GameStop and people who buy Bitcoin has a significant overlap,” said Craig Erlam, senior market analyst at OANDA Europe. “The kind of rationale to some extent behind what we’ve seen this week kind of links this taking on the institutions, taking on the establishment.”

Musk’s page on Twitter simply said #bitcoin with no further explanation, but speculation that the world’s richest man might be a Bitcoin investor was enough to set off the dramatic rally. Prices spiked in a matter of minutes, for the biggest intraday move in almost a year.

“This huge melt-up is due to Elon’s tweet,” said Antoni Trenchev, managing partner and co-founder of Nexo in London, which bills itself as the world’s biggest crypto lender. Musk’s support for Bitcoin “creates a safe zone for some of the smaller companies and possibly everyone in the S&P 500 to allocate into Bitcoin,” he said.

Musk also tweeted an image of a “Dogue” magazine cover featuring a whippet in a red sweater -- a play on the fashion magazine “Vogue.” He also sent posts calling Cyberpunk a great video game and said, “In retrospect, it was inevitable.”

Coinbase, the largest U.S. digital-asset exchange, also had issues with deposits and withdrawals.

Traders trying to read between the lines of Musk’s tweets interpreted his cryptic messages as support for Bitcoin and Dogecoin, a digital coin originally created as a joke. Dogecoin prices skyrocked higher on Friday, jumping about 300 per cent in the last 24 hours to US$0.04355, according to CoinMarketCap data.

It’s not the first time Musk has hinted at crypto assets. Earlier this month, he agreed with a post referencing being paid in Bitcoin, and when someone asked if he owned any Dogecoin, he replied, “No, but maybe one day.”