In a quiet week by 2021 standards, the speculative excesses that have defined this bull market hit new records with little fanfare.

Stocks have added more than US$6.8 trillion globally in six weeks. Digital currencies have boomed to a market cap of more than US$1.4 trillion. Cathie Wood’s tech-focused ETFs now manage over US$50 billion and counting.

Get used to it for now, say strategists at Goldman Sachs Group Inc.

“More bullish sentiment suggests risky assets are now more vulnerable to disappointments on the recovery or on central bank support,” a team including Alessio Rizzi wrote in a note. “But positioning can remain bullish unless one of these risks materialises.”

After a week which recorded the strongest-ever inflows to equities, here’s a look at “meme” trades gripping social media and Wall Street right now.

For the most part, cannabis and cryptocurrencies have surged in tandem in 2021, suggesting both have been riding the wave of online retail investor enthusiasm. 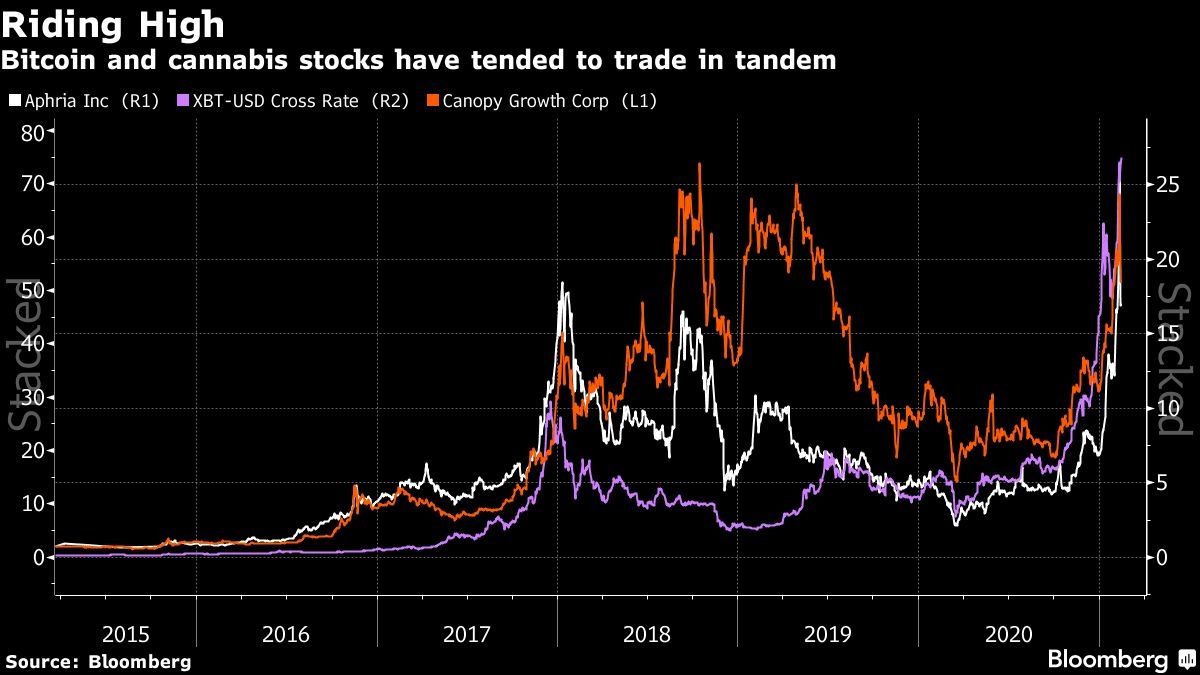 The past week has been a wild ride for pot stocks. The ETFMG Alternative Harvest ETF (ticker MJ) posted its largest three-day rally on record with a 42 per cent surge, before plunging 26 per cent in two days.

Whether they’re chasing price momentum or betting big on the recovery trade, the day traders mesmerizing Wall Street have been racking up big profits, according to a Goldman Sachs basket tracking their favorite names. 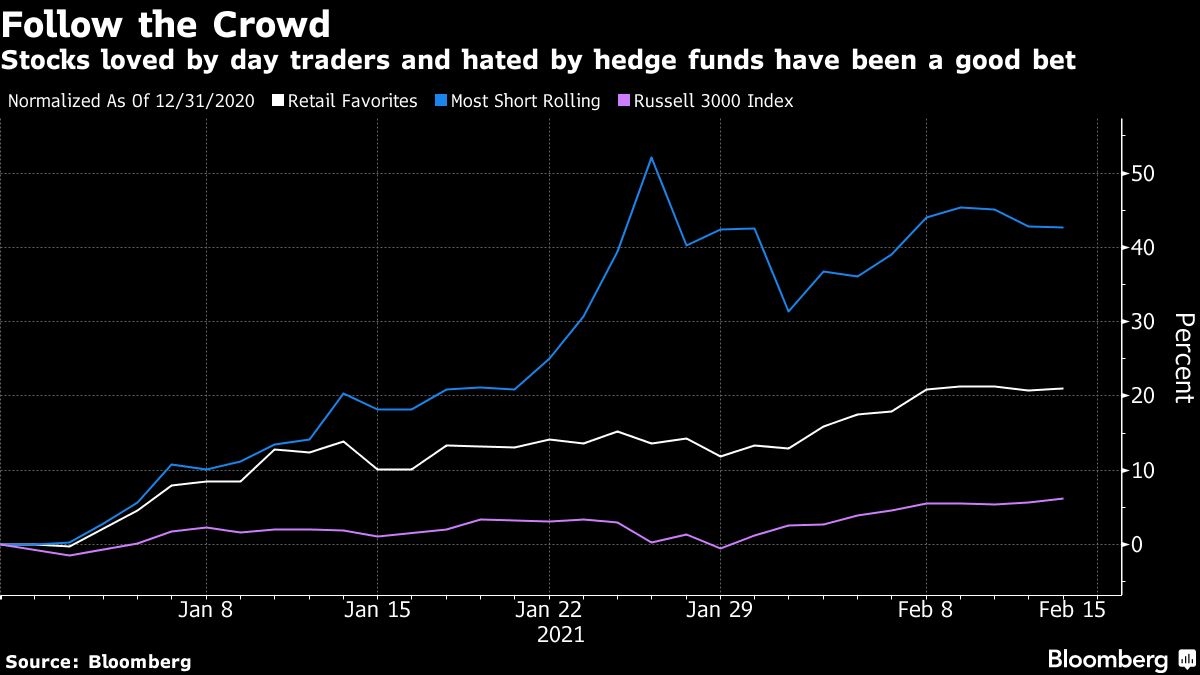 After retail investors ignited a hedge-fund squeeze in a handful of small-cap stocks, a portfolio tracking the most-shorted shares is up more than 40 per cent this year.

The enthusiasm of novice traders for cyclical companies in challenged industries has put the Russell Microcap Index on track for its best quarter versus the S&P 500 -- by far. That’s coming after what was already a blockbuster period for the market’s smallest segment. 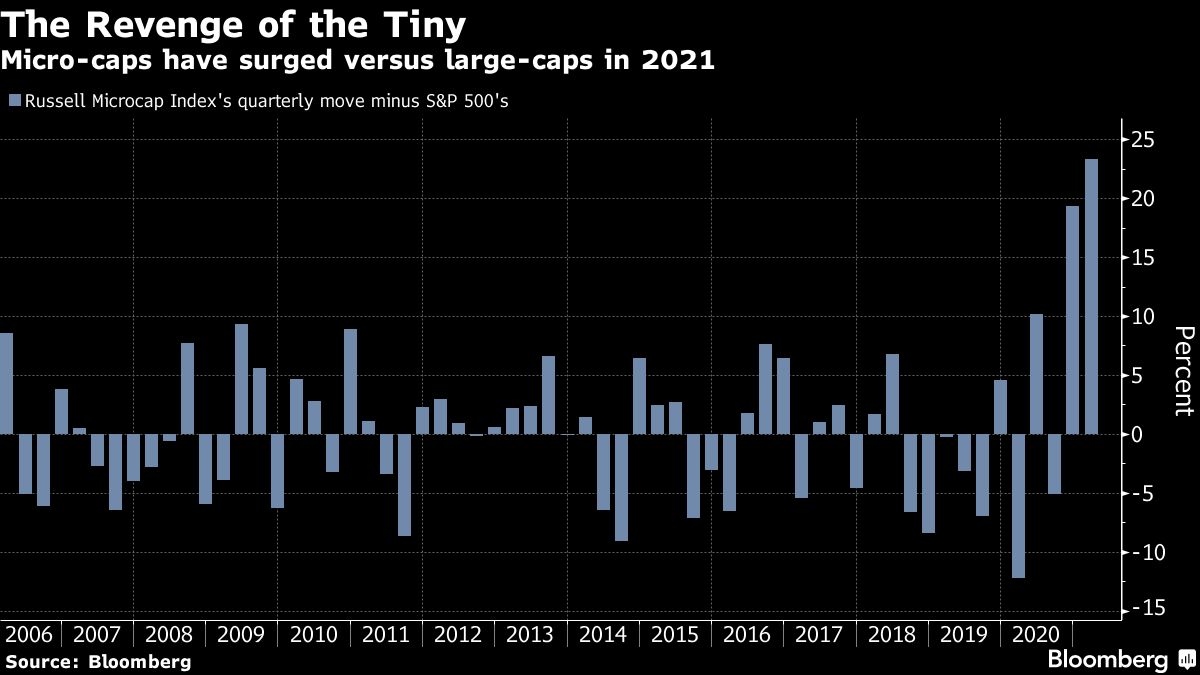 There are plenty of signs the rally is overheating. Stock funds had record inflows of US$58 billion in the week through Feb. 10 according to Bank of America Corp. -- moving its bull-bear indicator closer to a sell signal.

Implied volatility in the Russell 2000 recently climbed for five sessions straight, while the small-cap index was rising at the same time.

“We have been watching for situations where both volatility and prices are going up at the same time as a potential sign of froth,” wrote Chris Murphy, the co-head of derivatives strategy at Susquehanna International Group in a Thursday note.

One reason why traders have powered into small and mid-sized companies: Megacaps are pricey by almost every measure. The S&P 500 is trading at 22 times next year’s expected earnings, close to a two-decade high notched last year. 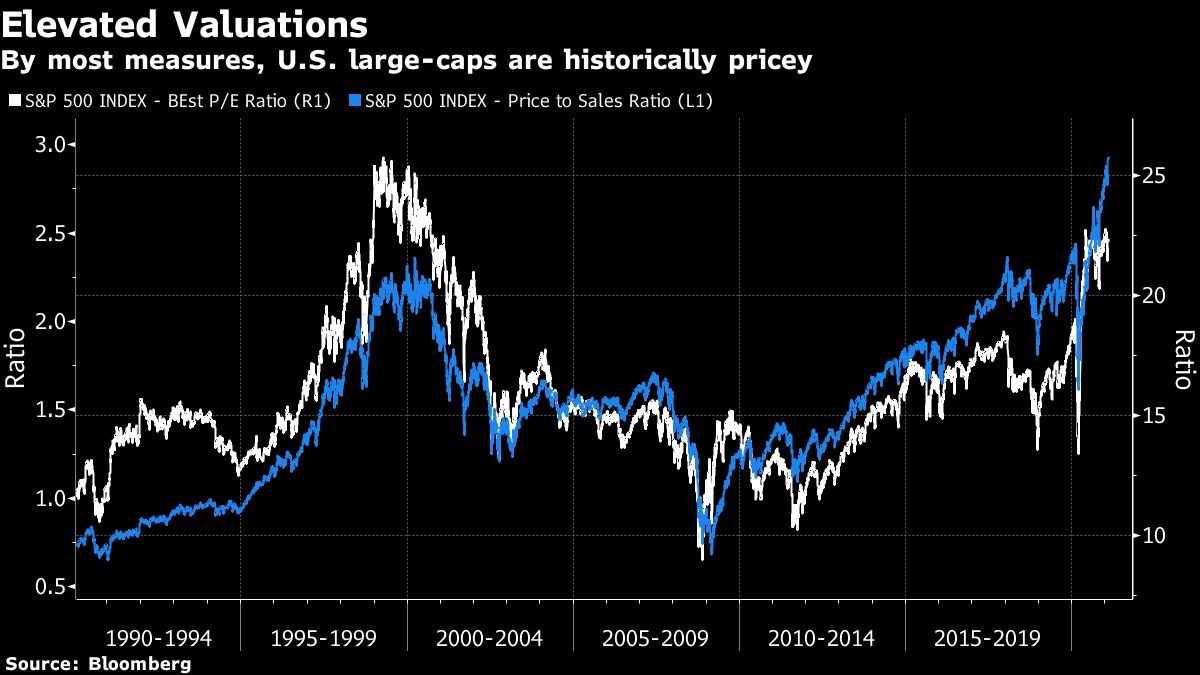 All this may be justified by low interest rates adjusted for inflation or Big Tech riding shifts in the global economy. Yet compared with sales, the benchmark has never been more expensive.

Day traders betting they can get rich buying trendy companies in industries like solar power and cloud computing are herding into Ark Investment Management products.

Trading volumes for Cathie Wood’s main exchange-traded fund reached an all-time high on Wednesday. Inflows in the first week of February were a record at more than US$1.1 billion. 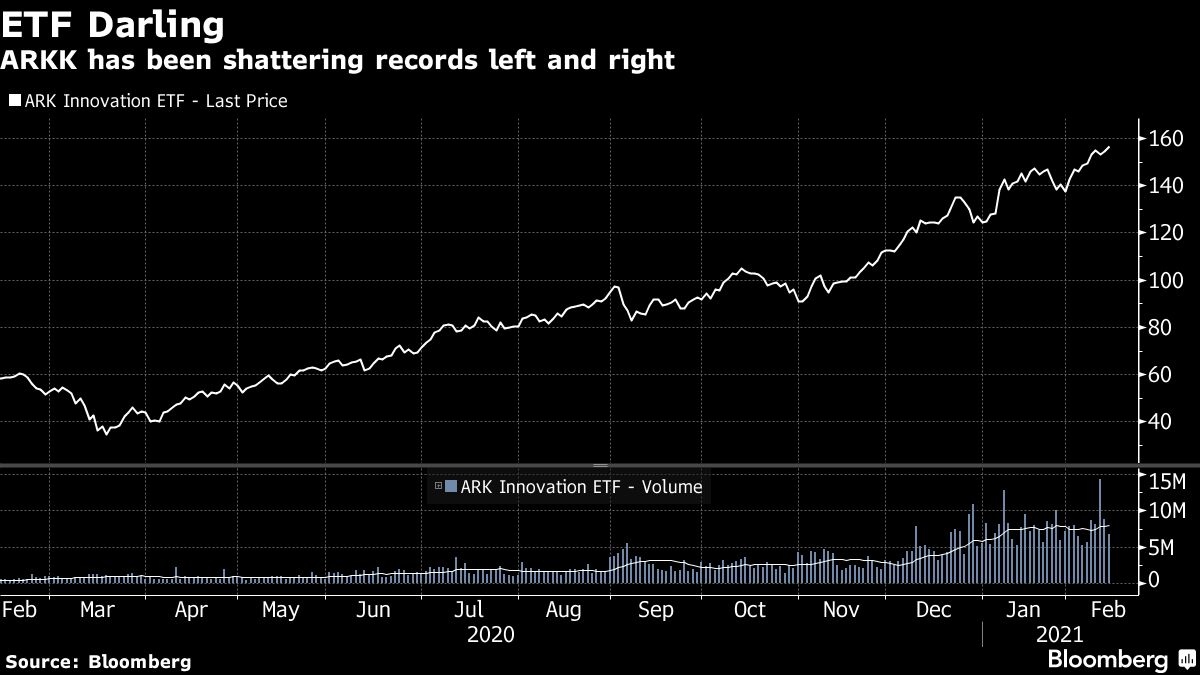 Those allocations are following performance: the ARK Innovation ETF (ARKK) has already jumped 26 per cent in 2021, after gaining 149 per cent in 2020.

With animal spirits running wild, a stream of private companies is rushing to make their public debuts and so-called blank-check firms are launching at a rapid clip after a boom last year.

Some 155 special-purpose acquisition companies filed for initial public offerings in the first six weeks of 2021, seeking to raise a collective US$46 billion, according to data compiled by Bloomberg. 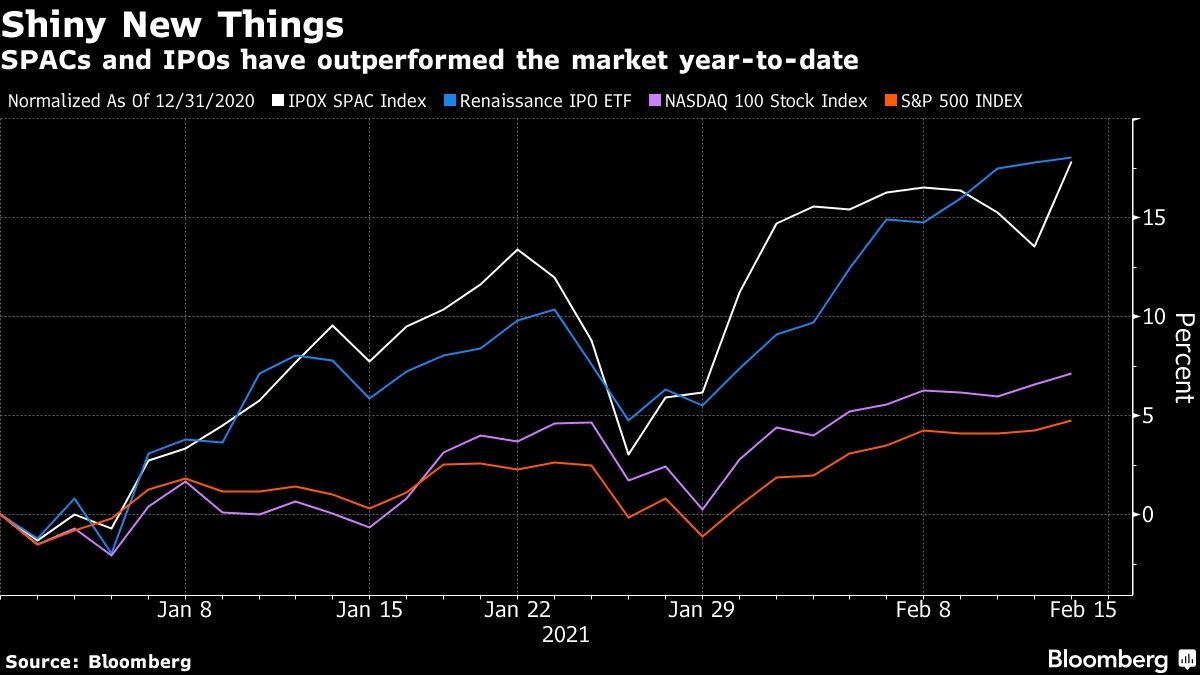 So far betting on these new securities has been a solid trade. A SPAC index is up 18 per cent this year and an ETF tracking initial public offerings is also 18 per cent higher.