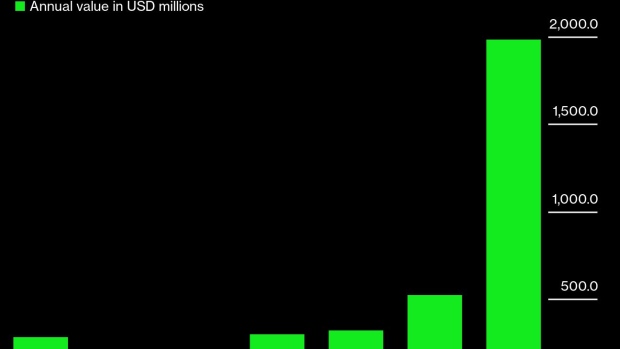 (Bloomberg) -- Speculators in carbon offsets are finding they’ve been shut out of some corners of the market by a small but growing group of sellers.

“Our priority is to keep forests in the ground and to compensate the people who do that,” Jo Anderson, co-founder and finance director of Carbon Tanzania, an Anglo-Tanzanian social enterprise that generates and sells carbon offsets, said in an interview. “We realized we didn’t want to allow potentially bad actors to be able to exploit what we’re doing.”

Carbon Tanzania isn’t alone in turning away buyers that don’t meet their criteria. Such sellers are increasingly applying restrictions on how offsets are used, according to Ana Haurie, co-founder and chief executive of Respira, a carbon market intermediary. That’s as the market for carbon offsets remains unregulated, allowing products to be sold -- and resold -- without actually reducing the amount of carbon dioxide in the atmosphere.

“Many project developers are quite particular about who the credits go to,” said Haurie. “It’s either sector specific or they want the credits to be retired and not be used for speculation or financial trading purposes.” The oil and gas sector is a common exclusion, she said.

Efforts to blacklist speculators are part of a broader trend limiting supply in the global carbon offsets market, forcing traders to take note. Some governments have started reviewing laws to stop companies from exporting credits that might fit into national climate plans, and to ensure they get a fair share of the proceeds.

“We are entering a phase of continued fragmentation in the space, which I think ultimately is unhelpful in terms of how the market evolves,” said Matt Townsend, partner at law firm Allen & Overy.

Oil and gas companies were the biggest buyers of voluntary credits last year, with demand rising ninefold from 2020, according to a May report by the World Bank. Financial firms also “significantly” increased their buying, while interest from traders and investors looking to turn a profit helped drive the market to record highs, according to the report.

The confusion around how carbon credits should be used also reflects a larger problem: the lack of standardization around net zero claims, the World Bank said.

The International Emissions Trading Association has acknowledged that members face a turbulent time ahead. With rules and standards continually in flux, “there are certainly some legal and political risks that are not great for investors and for investor confidence going forward,” said Andrea Bonzanni, international policy director at IETA.

Carbon Tanzania works with local communities to prevent deforestation and the emissions that come with it. The group then sells carbon offsets on the basis of the so-called avoided emissions that its work brings about.

The poor quality of many offsets being traded -- as well as the sometimes false claims made on behalf of end users -- has led to skepticism from industry experts, policy makers and businesses. Various initiatives have been set up to tackle such issues during the more-than three decades since the first offset project was launched in Guatemala, but a common approach is yet to be agreed.

That lack of clear rules is why Anderson and others have started creating their own standards. A key criterion that potential buyers must fulfill is to prove that they will use the offset for emissions compensation, and not use it as an asset for trading.

“The first thing that we wanted to address was this issue of market speculation and trading,” he said. Conventional commodity markets have been “prey to greed and exploitation.”

Such speculation isn’t “going to stop trees being cut down,” he said. “It’s just not possible. The philosophy is wrong, the motivations are wrong, the incentive structures are all wrong. I worry that what will happen is that it’ll be like the cocoa market where farmers get 2-3% of the final price for their one pound of cocoa. In the carbon markets now, we need to return at least 50-60% to the producers to make this work.”

Carbon Tanzania’s other criteria for buyers are that they must have a public, science-based emissions reduction target. And buyers are expected to make responsible claims on the basis of the offsets purchased from the project, with Anderson retaining the right to vet any public facing content.

2021 was a bumper year for the carbon offsets market, which quadrupled in size to almost $2 billion from $520 million in 2020 by value of credits sold, according to an August report by Ecosystem Marketplace, a data provider. So far this year issuances are down, at 114 million tons compared to a total of 396 million tons in 2021. Meanwhile, prices are moving higher with the volume of reported forward transactions increasing by 65% from 2020 to 2021.

Morgan Stanley analysts estimate the secondary market of “speculatory investors” was about 2-3 times larger than the primary market in 2021, according to a May note. Commodities giants Vitol, Glencore, and Trafigura all opened carbon trading desks last year.

Anderson says that without clearer regulatory guidelines, suppliers will struggle to maintain the highest standards.

Dealing with “meaningless” terms like carbon neutral is a “regulatory issue,” he said. It’s “unfair” to expect a project developer to have the ability to control that.