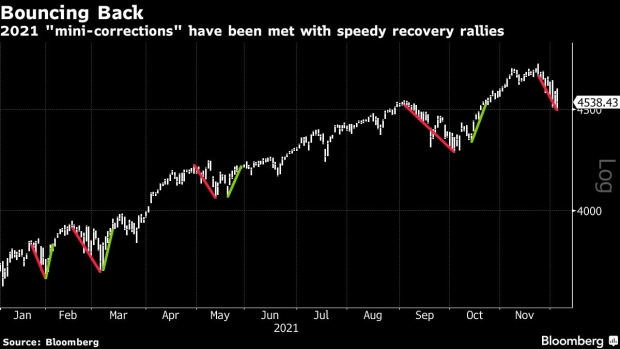 A monitor displays an S&P 500 chart on the floor of the New York Stock Exchange. , Photographer: Michael Nagle/Bloomberg

Historically, recovering gains from pullbacks or corrections has tended to take at least as long as the drop itself. Markets haven’t seen this pace of dip-buying since 2016, which marked the beginning of two years of coordinated global growth until the trade war between the U.S. and China roiled financial markets in 2018.

A similar dynamic is visible now, with every region of the world simultaneously seeing consumption and production rise relative to last year at the same time. Recovering from a halted global economy is creating surging demand, something that’s arguably being reflected in the U.S. stock market.

It’s almost reminiscent of the historically speedy recovery that followed the March 2020 bear market, which only took five months to regain the losses as mega-cap tech led the way. Indeed, the same handful of companies have been leading the relief rallies in 2021 following these pullbacks -- and creating 66 record highs for the S&P 500.

Looking at recent price action, the S&P 500 has had a maximum drawdown of 4.1% since Black Friday on Nov. 26, amid thinner trading. December tends to have lighter trading volume than the rest of the year as Wall Street equity desks slouch into the holiday season. Ordinarily, this leads to a “Santa Rally” in the benchmark. But investors are wondering if that will materialize this year this time, with markets fearing tighter monetary policy on the horizon.