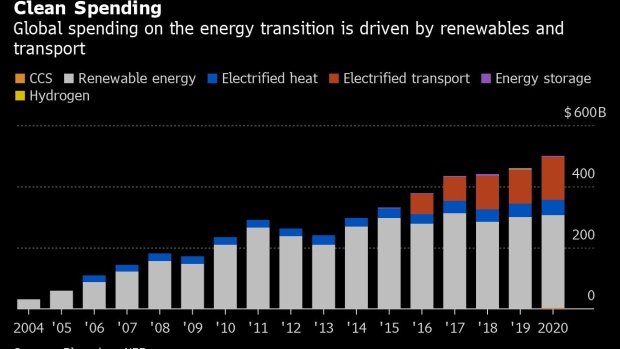 An employee holds an electric charging plug at an electric vehicle refueling site operated by Enercity AG in Hanover, Germany, on Thursday, July 23, 2020. Europe’s largest car market is rolling out a nationwide electric car charging infrastructure by 2030 in an effort to rein in transport emissions. , Bloomberg

(Bloomberg) -- The world spent a record $501.3 billion in 2020 on renewable power, electric vehicles and other technologies to cut the global energy system’s dependence on fossil fuels.

The investments in the transition to a low-carbon economy marked a 9% increase over 2019 and came despite disruptions from the Covid-19 pandemic, according to a report out Tuesday from BloombergNEF.

The growth wasn’t spread evenly across the globe. Investment in renewable power capacity, which accounted for the the biggest chunk of spending tallied by BNEF, soared 52% in Europe compared to last year. But it fell 20% in the U.S. and 12% in China.

The record investment comes as pressure mounts to cut greenhouse-gas emissions and avoid the most dire effects of climate change. But even the massive increase in spending on wind and solar farms, energy storage and EVs won’t be enough to meet the Paris Agreement’s goal to limit global warming to below 2 degrees Celsius.

“It’s very encouraging that investment is taking place at a high level, but it’s well short of what would be required to put the world on a path of 2 degrees of global warming,” Angus McCrone, chief editor of BNEF, said in an interview.

Spending on renewables rose 2% globally, boosted by the biggest-ever expansion of solar power and a 56% surge for offshore wind projects, to $50 billion, according to the report. While it wasn’t a record year for spending on clean electricity, falling costs allowed developers to install more renewables than ever before, adding 132 gigawatts of solar and 73 gigawatts of wind.

The dip in U.S. clean-energy spending last year came after investments hit a record high in 2019 as wind-farm developers pushed to take advantage of tax credits before they expired.

“The coronavirus pandemic has held back progress on some projects, but overall investment in wind and solar has been robust and electric vehicle sales jumped more than expected,” Jon Moore, chief executive of BNEF, said. “Policy ambition is clearly rising as more countries and businesses commit to net-zero targets.”

One of the biggest drivers of new energy transition spending this year was from clean transportation. Europe led the way, with $64.7 billion spent on electric transport, overtaking Asia for the first time. China was just behind with $45.3 billion of investment, the least it’s spent on the sector since 2016, according to the BNEF.

And as shares of electric vehicle maker Tesla soared to make Elon Musk the world’s richest man, competition was on the rise. EV companies raised about $24.5 billion from equity markets last year, up from just $1.6 billion in 2019.

Global investment in carbon capture and storage tripled to almost $3 billion in 2020, according to the report. That technology could play a key role in reducing emissions from heavy polluting industries. Much of 2020’s growth was due to the Norwegian government green-lighting a new project that will store carbon emissions under the North Sea.