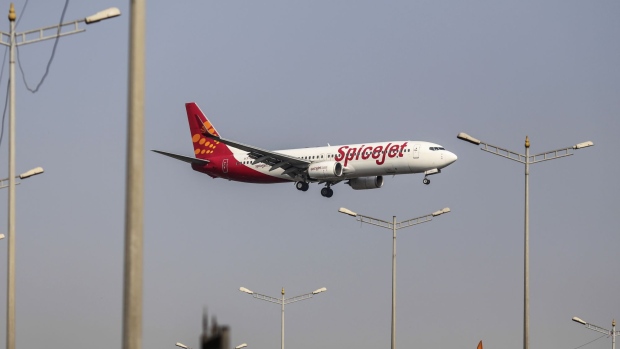 (Bloomberg) -- A Boeing Co. 737 Max operated by SpiceJet Ltd. made an emergency landing in Karachi after an indicator light malfunctioned, according to a spokesman for the Indian low-cost carrier.

The plane was en route to Dubai from New Delhi and landed safely after diverting to the Pakistani city, where a replacement aircraft was headed to pick up passengers and complete the journey, the spokesman said.

Boeing’s Max jets were grounded worldwide in March 2019 following crashes in Indonesia and Ethiopia that killed everyone on board both planes. The aircraft’s so-called Maneuvering Characteristics Augmentation System was blamed for playing a part in both tragedies, prompting Boeing to make fixes to the software in order to get its best-selling plane certified to fly again.

India took later than most major markets to lift its ban on the Max, approving its return in August last year. That came after Boeing met requirements of local regulators, including setting up a simulator in the country.

The US was among the first to allow the Max to resume commercial flights in late 2020, but it still hasn’t returned to full service in China.

In December, a SpiceJet Max had to return to Mumbai shortly after take off due to technical issue involving an oil filter light that prompted the crew to shut down an engine. The plane landed safely and nobody was injured.

SpiceJet shares fell as much as 2.9% on Tuesday.