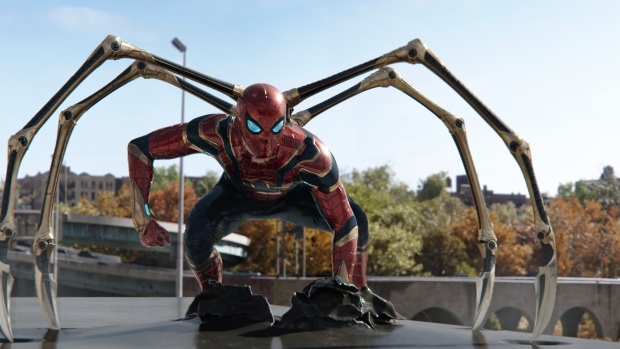 Spider-Man fans jammed theaters across North America, shattering the opening-weekend record for a movie released during the pandemic, even as COVID cases surged in many places.

“Spider-Man: No Way Home” generated US$253 million in U.S. and Canada ticket sales in its debut, Sony Group said in a statement. The film, made in conjunction with Walt Disney Co.’s Marvel division, had the third-highest domestic opening weekend of all time, beating Boxoffice Pro’s forecast of US$224 million, as well as Sony’s own projections.

The two recent “Avengers” movies had the biggest opening weekends in movie history, though “No Way Home” is well ahead of the “Star Wars” and “Jurassic World” franchises.

International theaters brought in an additional US$334.2 million, Sony said. Among individual markets, it was second-highest opening ever in Brazil and the second-highest for a Hollywood film in India.

Cinemas have longed for a blockbuster capable of reaching a massive audience -- and “No Way Home” delivered. The biggest North American debut of pandemic times had been the US$90 million opening achieved almost three months ago by Sony’s “Venom: Let There Be Carnage.” By comparison, six films topped US$100 million in their first weekends in 2019.

The sales were enough to instantly make “No Way Home” the top-grossing film released domestically this year. Sony relied on a core demographic of 18-to-34-year-old fans who made up 62 per cent of ticket buyers. Unlike many other movies released during the pandemic, “No Way Home” was only available in theaters. The results  “reaffirm the unmatched cultural impact that exclusive theatrical films can have,” Sony’s Motion Picture Group Chairman Tom Rothman said in a statement.

Theater chains hope the success portends a strong 2022, when a number of films delayed by the pandemic are scheduled for release, including new installments of “Top Gun” and “Jurassic World.” But this weekend’s results may prove to be a one-off success.

The industry’s recovery has been uneven -- and theaters face a new threat in the omicron variant. The disappointing debut this month of the well-reviewed “West Side Story” remake from Steven Spielberg again underscored that older audiences aren’t rushing back to cinemas.

AMC Entertainment Holdings Inc., the biggest theater chain, fell 2 per cent to US$28.67 in early trading Monday, giving back some of last Friday’s 19 per cent gain ahead of opening weekend. Sony fell 3 per cent in Tokyo.

“No Way Home” continues a strong run for the Spider-Man franchise. Tobey Maguire’s debut as the character in 2002 was the first movie to exceed US$100 million in its Friday-to-Sunday opening weekend, according to Comscore Inc.

The new film is the third in the latest round of pictures starring Tom Holland as the title character and directed by Jon Watts. It benefited from a great deal of social media buzz, including a trailer viewed 356 million times in its first day, as well as reports the film may, or may not, be Holland’s last appearance.

The presence of another Marvel character, Doctor Strange, played by Benedict Cumberbatch, also likely sparked excitement from fans. In the film, Strange casts a spell to help Spider-Man after his secret identity is revealed, but the magic backfires, unleashing new villains. Alfred Molina, who plays the creepy Doctor Octopus, Jon Favreau and Marisa Tomei are also in the cast.

Some 94 per cent of critics recommended the picture, according to the website Rotten Tomatoes.

Another new movie -- “Nightmare Alley” from Disney’s Searchlight Pictures -- made US$3 million in its domestic debut, the studio said. The crime thriller stars Bradley Cooper, Cate Blanchett and Rooney Mara. About 80 per cent of critics recommended it.