Canadian restaurants are ramping up hiring as provinces relax COVID-19 restrictions, a good sign of a coming recovery in one of the sectors hardest hit by the pandemic.

Job listings in the food preparation and service sectors have spiked in recent weeks, climbing 37 per cent above pre-pandemic levels as of June 18, according to data released Monday by Indeed Canada. The numbers mark the first time the sector has substantially outpaced the broader economy since the start of the pandemic.

Strong demand for bartenders, kitchen help and servers suggests the food and accommodation sector -- which accounts for the bulk of jobs still lost from COVID-19 -- is poised to bounce back sharply in coming months as the nation reopens after successive waves of the virus over the winter. The industry accounts for 64 per cent of the 571,000 positions yet to be recovered since the start of the health crisis. 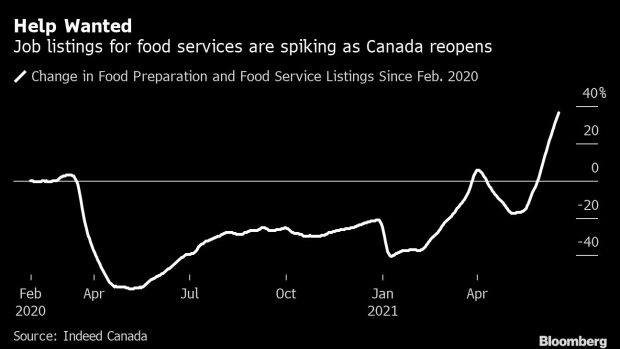 “It’s clearly the reopening of previously shuttered establishments or the return of indoor dining that is driving this surge right now,” Brendon Bernard, an economist at the job-listings firm, said in a phone interview.

The pick-up in demand has been so sudden that businesses could struggle to find enough workers.

According to an analysis of searches by job seekers, Indeed Canada found interest in the food-services industry remains below pre-pandemic levels. Bernard said some workers may have left the industry altogether because of closures that lasted all winter in some cities. Generous government support programs could also be undermining supply, whiles some workers may be worried about health risks.