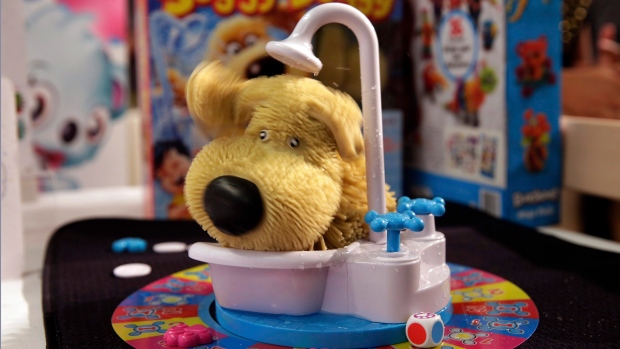 Spin Master Corp. says its net income fell nearly 14 per cent in the first quarter due in part to the impact of a multi-million dollar Toys 'R' Us bad debt expense. , AP Photo/Richard Drew

The Toronto-based toy maker, which uses U.S. currency in its financial reports, says it had net income of $26.9 million or 26 cents per share in the three months ended June 30, compared with $22.1 million, or 22 cents a year earlier.

Analysts had forecast net income of $17.5 million or 16 cents per share on revenue of $276 million, according to Thomson Reuters Eikon.

CEO Ben Gadbois said in a statement the strong performance resulted from steady consumer demand for the company's brands, which include Hatchimals and Paw Patrol, and its entertainment franchises.

“Looking forward to the balance of 2018 and beyond, we are excited about our upcoming innovative product launches as well as our new entertainment content.”

Spin Master reported sales of activities, fun furniture and games and puzzles rose 49 per cent to $86 million in the second quarter compared to the same period of 2017, while remote control and interactive characters fell 19 per cent to $68 million.

Spin Master's net income in the first quarter was $8.7 million, or nine cents per share, thanks in part to a $15.2-million bad debt expense related to the Toys “R” Us store closings.