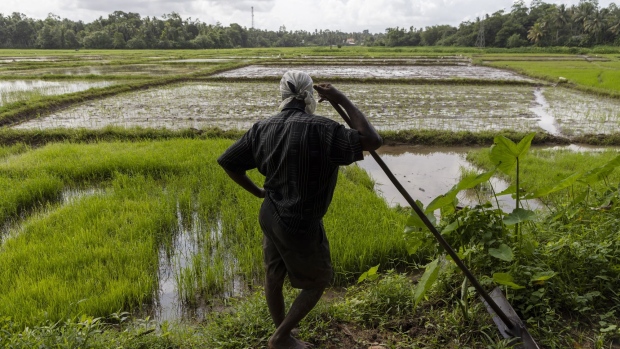 (Bloomberg) -- For R. Daranagama, a 70-year-old rice farmer, the past year ranks among the most difficult of his life.

As Sri Lanka battles its worst economic crisis in decades, Daranagama has barely touched his four-acre field this season. Without access to fertilizer, he and other farmers expect crop yields to slump, threatening food supplies across a nation already pushed to the brink.

“I do not know what the harvest will be,” said Daranagama, who grows rice in the coastal district of Gampaha. “I have never seen a situation like this.”

Fears of a hunger crisis are rising in Sri Lanka, a teardrop-shaped island south of India. Shortages of items like flour and milk powder are widespread. Food inflation hovers around 60%. Faced with exorbitant costs, many farmers like Daranagama have skipped rice cultivation entirely this season. It’s a scary turnaround for a middle-income country that once faced no problems feeding a population of 22 million people.

Sri Lanka’s economic meltdown, the most dire since the nation achieved independence from the British in 1948, has taken a severe toll on the agriculture sector. Rice production in the last harvest season had already plunged 40% to 50%. Now, seed and fertilizer scarcities could shrink crop yields by as much as 50% this year, according to Mahinda Amaraweera, the agriculture minister.

Prime Minister Ranil Wickremesinghe has warned that curbing hunger is one of Sri Lanka’s biggest challenges over the next few months, prompting people with means to start stockpiling supplies. The United Nations estimates that almost a quarter of the population already require food assistance.

Jayavardhana Pridarshani, a mother of four who lives in Hambantota, a stronghold of the ruling Rajapaksa dynasty, said her family used to eat fish or eggs daily. These days, they can only afford to have those items once a month. She said schools have stopped serving meals to students and fishermen rarely go out to sea because of fuel shortages, even though there’s an abundance of fish.

“Children here, including mine, are suffering from fatigue and weakness,” she said, adding that a doctor had warned that those were symptoms of protein deficiency.

The problem echoes across Sri Lanka. Sajith Premadasa, leader of the political opposition, said an estimated 15% of children in the country are “wasting.” That term refers to underweight children whose immune systems are weak, leaving them vulnerable to developmental delays, disease and even death.

At the Lady Ridgeway hospital in Colombo, the country’s largest for children, about 20% of patients suffer from malnutrition due to the ongoing crisis, local media reported. Poor nutrition carries a significant economic burden in terms of higher health care costs and reduced productivity.

But without adequate preparation, the plan backfired. Sri Lanka’s entire agricultural chain — around a third of the labor force and 8% of gross domestic product — faced disruptions. Export earnings from tea, a key revenue source, dried up. As backlash grew, the government began to reverse the ban in November.

President Rajapaksa said the synthetic fertilizer ban was intended to increase the income of farmers by providing them with sustainable and cheaper alternatives. In a recent interview with Bloomberg News, he acknowledged problems with execution.

“Our organic fertilizer manufacturers didn’t have the capacity, but I was not informed,” he said. “I didn’t get the support from people who were responsible.”

Without a bailout from the International Monetary Fund, many worry that Sri Lanka could now go the way of Venezuela, with an essentially worthless currency causing hardship for years to come. For weeks, demonstrators have shut down parts of Colombo, the capital. Much of the public’s anger is directed at the Rajapaksa family, who have led the country for most of the past two decades.

Shock waves from the fertilizer ban continue to reverberate. Due to the increased costs of production — as high as double for paddy crops — a smaller fraction of farmers have prepared for this year’s Yala harvest, which coincides with the monsoon season running from May to August.

The situation has turned desperate for poorer Sri Lankans. Amaraweera, the agriculture minister, has urged people to grow crops at home, saying it’s the only solution to the crisis. For the next three months, the government has given state employees Fridays off from work to tend to their gardens. To meet shortages, Sri Lanka will need to spend over $200 million to import fertilizers this year.

So far, the government expects a combined $150 million in assistance from the World Bank and Asian Development Bank, according to a senior official familiar with the matter. The Export-Import Bank of India has already extended a $55 million loan to Sri Lanka to buy urea, a form of synthetic nitrogen fertilizer. And China has sent rice shipments to fill supply gaps.

But with dwindling food reserves and record global prices for grain and fertilizer due to the war in Ukraine, Sri Lanka is running out of options. Even with humanitarian aid and a recent uptick in cultivation, widespread hunger is possible if more farmers can’t grow or harvest their crops because of runaway prices.

K. Sugath, a 52-year-old farmer, said the challenges keep piling up. Without access to urea, he planted only an acre of rice paddy this season. Many farmers in his area have opted against cultivation entirely, arguing that available organic fertilizers yield limited crops. High fuel prices also mean running a tractor costs twice as much now.

Sugath isn’t optimistic about his harvest, but he worries there’s no choice if he wants to keep his family fed.

“Paddy prices have gone up but no one is selling,” he said.