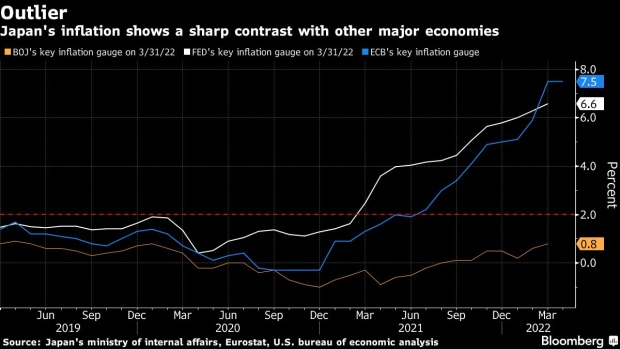 An employee selects a plate of tuna sushi from a conveyor belt at a Kura Corp. sushi restaurant in Kaizuka, Osaka prefecture, Japan, on Thursday, Aug. 17, 2017. Kura operates a revolving sushi restaurant chain based in Osaka. , Bloomberg

(Bloomberg) -- From the cost of chilled sushi served with a dab of soy sauce to the expense of sizzling gyoza dumplings accompanied by a glass of frothing beer, prices are bubbling up in Japan at a pace that’s going to feel a lot faster than 2% for most consumers over the coming months.

That’s a factor that could have far-reaching implications for businesses and policy makers as Japan looks to be edging closer to a tipping point that turns one-off price hikes into an upward spiral.

Figures due Friday are expected to show key consumer prices already rising by 2% in April. Outside tax hike years, that would be the fastest pace since September 2008.

While Japan still remains the laggard in a global wave of accelerating inflation, it is not immune to the cost-push forces that have left egg on the faces of central bankers across the world. Many of them previously argued that prices would only spike temporarily.

After nine years of heavy lifting by the Bank of Japan, it’s a combination of pandemic recovery, a cratering yen, supply chain snarls and the war in Ukraine that is pushing the world’s third-largest economy closest to a cycle of self-sustaining inflation in a generation.

The key question is whether consumers will pour cold water on more expensive products and services by paring back spending or whether price momentum is building sufficiently for a cycle of inflation to bed in.

For BOJ Governor Haruhiko Kuroda and most Japan economists, it’s still a temporary phenomenon that lacks firmer foundations. But not everyone is so sure.

“Even with our price increases in March we won’t make up for the rise in raw material costs this fiscal year,” Isao Miyashita, president of Itoham Yonekyu Holdings, said earlier this month after the company raised its processed food and sausage prices by up to 14%. “We may have to consider another round of price hikes if costs increase more.”

The company already has. From July 1, Itoham’s cream cheese products will also rise by as much as 14.5%, it announced Tuesday.

Conveyor-belt sushi prices are also going up. Food & Life Cos., operator of the Sushiro chain, said this month it will push up its 100 yen (78 cents) a dish price at some stores by around 9%, breaking away from a 38-year tradition of sticking to that mark.

Like other companies in Japan, Food & Life said it had ramped up its use of information technology and diversified its supply chains to try to maintain its prices. But a threshold had been breached with the cheaper yen among the primary factors that forced the company to raise prices, it said.

Drinks maker Asahi Group Holdings Ltd. also flagged its intention to jack up prices on its “Super Dry” beer and other beverages by up to 10% from October, a move that has been followed by rivals Kirin Holdings Co. and Suntory Beverage & Food Ltd.

Mirroring similar price hikes by other companies, Asahi gave months of warning, adding to the anecdotal evidence that a wave of price increases between 8% and 14% is going to hit consumers as the year progresses.

“It’s too optimistic to say Japan is at the tipping point, but we may be getting closer to it,” said Hirofumi Suzuki, economist at Sumitomo Mitsui Banking Corp. “No one really thought inflation would come this far. So this is probably the best chance for the economy to turn inflationary in a long while.”

Japanese companies have typically opted to absorb higher costs without raising prices. This reluctance among businesses reflects the desire to avoid losing customers who have become hyper-sensitive to upward changes after more than a decade of deflation and weak prices, combined with a lack of wage growth.

A hefty proportion of consumers are also seniors living on tight retirement budgets that are not inflation friendly.

Still, the pressure on Japanese companies to raise prices is at its strongest in decades as input costs rise at the fastest pace since 1980.

The jump in inflation expected in April also stems from the technical factor of sharp cell phone fee cuts from last year fading out of the statistics. That will make it easier to see that energy costs are the main force driving prices up, while processed foods are among the household products showing gains.

Analysts argue that it’s easier for some firms to lift prices than for others.

“Competitive companies that can hike prices can increase their profits. So resource-related companies, such as trading firms, are doing well,” said Masayuki Kubota, chief equity strategist at Rakuten Securities. “But in downstream industries, passing on higher prices is harder, so we should see a polarization between firms that can raise prices and those that can’t.”

Central bank data show that around 63% of items in the consumer price index rose in March 2022 compared with 47% in January 2021. While that figure points to a widening trend of rising prices, it’s still below the 69% peak reached in March 2016 during Kuroda’s tenure.

With price gains at around 8% in other major economies, Japan’s inflation still looks subdued even with the expected gains.

Still, the regular news of price hikes and the impact of already higher fuel and energy prices are influencing households. Around 94% of them now see prices increasing over the coming year, according to a Cabinet Office survey, an indication that inflation expectations are changing.

Prime Minister Fumio Kishida has been forced to compile an economic package before elections this summer to ease the pain of soaring energy and food essentials.

For now, Kuroda sees no reason to budge from his stimulus stance. The BOJ believes short-term cost-push inflation won’t last, as it projects annual inflation to slow to 1.1% in the year starting April 2023.

The current price gains are led by energy and not widespread, Kuroda has said. More importantly, Kuroda stresses the need for annual wage gains of around 3% in tandem with 2% inflation to create a positive cycle of growth in the economy that sticks.

“I would like to reemphasize that the current situation of Japan’s economy is completely different from the United States and Europe,” Kuroda said Friday, noting that almost all items in the US CPI basket have changed since last year.

Japan’s economy doesn’t need a scaling back of stimulus, it needs support as it tries to recover from Covid-19, Kuroda has indicated. The fragility of the recovery was highlighted Wednesday when figures for the first quarter showed the economy shrank for a fourth time during the pandemic.

Most economists also agree with the governor. Japan’s economy has shown in the past that consumers are quickly discouraged and the economy weakens when price increases hit without wage gains, preventing an inflation cycle taking hold.

“A combination of 2% core inflation and 1% real wage growth could be a tipping point for sustainable inflation in Japan, something that hasn’t existed since the early 1990s.”

“No matter how you look at Japan, the economic and inflation situations are different from what the Fed and European Central Bank are facing,” said Mio Uemura, an economist at Mizuho Research and Technologies. “Their hawkish turns may have left a strong impression on overseas investors, but I don’t expect that to happen at the BOJ.”

Still, speculation is likely to rumble on that the central bank will tweak policy given the renewed buoyancy in prices and pressure from the weakening yen.

“When prices are rising 2%, I think it is fair to say we are already in inflation,” Rakuten’s Kubota said, adding that if Kuroda acknowledged that, it would mean he was ready to change policy.

“Central bank comments shouldn’t be taken as pure economic observation,” Kubota said. “They are more a reflection of the bank’s policy intentions.”