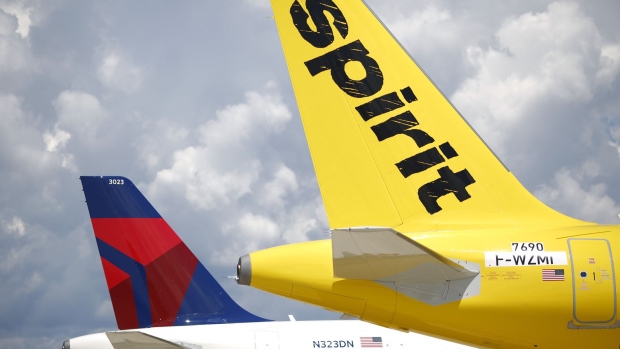 (Bloomberg) -- Spirit Airlines Inc. rebuffed a hostile $3.3 billion takeover offer from JetBlue Airways Corp., setting the stage for a potentially contentious vote by shareholders on whether to back a JetBlue bid or stand by a pending combination with rival deep discounter Frontier Group Holdings Inc.

Spirit said its board unanimously determined that the JetBlue proposal is not in the best interests of the carrier or its shareholders. The potential transaction “faces substantial regulatory hurdles” and is unlikely to be successfully completed, Spirit said Thursday in a statement. Spirit again recommended shareholders vote in favor of Frontier’s bid.

It was the second rejection of a JetBlue bid by Spirit’s board, which stood by Frontier’s $2.9 billion cash-and-stock deal agreed to in February. After an unsuccessful $3.6 billion cash offer, JetBlue on May 16 went hostile, offering the reduced proposal directly to Spirit shareholders in a tender offer.

Spirit shareholders will decide the issue during a June 10 special meeting.

The no-frills carrier stuck by its earlier reasoning that the Frontier offer has a better chance of closing. Market overlap in the eastern US between JetBlue and Spirit could raise antitrust questions at the same time JetBlue battles a federal lawsuit over a business alliance with American Airlines Group Inc.

With the pursuit of Spirit, JetBlue is seeking a burst of growth it can’t otherwise attain. The rival bid by Frontier would combine similarly focused deep-discounter carriers offering bare-bones low fares while charging for extras like coffee, bottled water and printed boarding passes. Either combination would pass Alaska Air Group Inc. to become the fifth-largest US airline by capacity.

Spirit’s allure stems in part from an industrywide turn toward domestic markets and leisure travelers -- the bread-and-butter of ultra-low-cost airlines -- as it’s recovered from a pandemic slump. Bigger carriers have moved more heavily onto that turf amid the slow return of overseas travel demand.

Under the Frontier deal, investors in Miramar, Florida-based Spirit would receive 1.9126 in Frontier stock and $2.13 in cash for each Spirit share. The deal implies a value of $25.83 a share for Spirit. Assumption of net debt and operating lease liabilities push the total value to $6.6 billion. Holders of Denver-based Frontier would own 51.5% of the combined company and name seven of the twelve directors. The agreement includes a $94.2 million breakup fee.

JetBlue has said its offer isn’t subject to approval by its shareholders or to a financing contingency, and includes a $200 million “reverse breakup fee” payable to Spirit if a deal is blocked for antitrust reasons. The proposed deal would generate as much as $700 million in annual synergies, the carrier has said.

A Spirit deal would give JetBlue, hounded by Wall Street analysts for much of its 23-year history over cost creep, access to an organization and management team highly focused on keeping operating expenses in check. JetBlue lost out in its only other takeover attempt when it was outbid by Alaska for Virgin America in 2016.