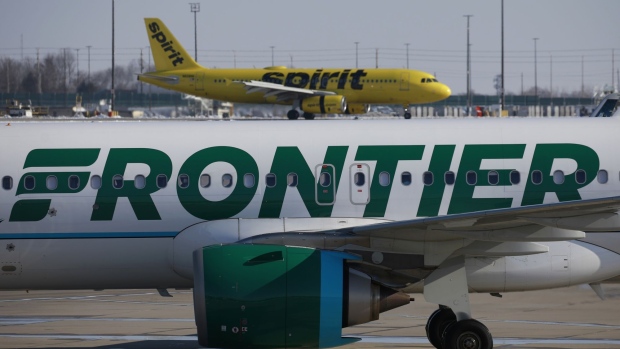 (Bloomberg) -- Spirit Airlines Inc. is delaying a shareholder meeting to vote on a proposed merger with Frontier Group Holdings Inc. less than 24 hours before it was scheduled, saying it needs more time for talks with Frontier and rival suitor JetBlue Airways Corp.

Spirit, which re-set the meeting for July 8, also will continue soliciting shareholder proxies for the ballot, the airline said in a statement late Wednesday. The move to adjourn came a day after it rejected an improved $3.7 billion all-cash offer from JetBlue, the airline’s fifth try at wooing Spirit.

Spirit delayed the shareholder vote once before, earlier in June. Frontier’s stock-and-cash offer is valued at $2.6 billion.

Both suitors are counting on a Spirit acquisition to provide a quick infusion of growth as domestic leisure travel surges. A Frontier-Spirit combination would create the nation’s largest deep fare discounter, placing it just behind the top four US carriers by domestic passenger traffic. JetBlue has said Spirit would “turbocharge” its expansion and make it a better competitor to bigger rivals.

“Spirit stockholders who have not already voted, or wish to change their vote, are strongly encouraged to submit their proxies as soon as possible,” the statement said. No voting will occur at the Thursday meeting, which will be opened and then immediately adjourned, it said.

Representatives for Frontier and JetBlue weren’t available for comment after normal business hours.