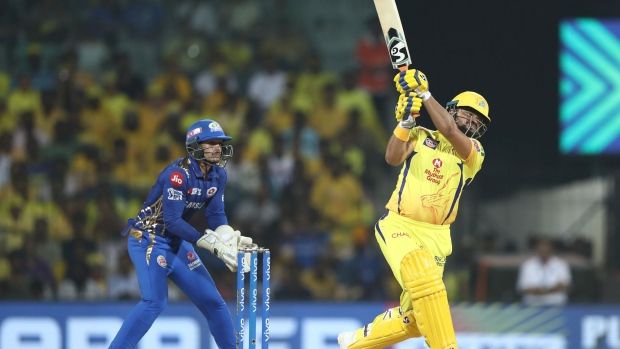 (Bloomberg Opinion) -- The coronavirus has upended sporting franchises from the National Basketball Association and the English Premier League to Formula 1. While basketball and soccer fans may be cursing as they twiddle their thumbs, their distress is likely to pale beside the loss felt by followers of the pandemic’s next victim. Cricket in India is as much a religion as a pastime to its legions of fans in this one-sport demographic colossus.

The Indian Premier League is almost certain to delay further or cancel its season, originally scheduled to start Sunday, after Prime Minister Narendra Modi imposed a three-week lockdown on the country of 1.3 billion. Sealing India’s borders would prevent key international players from flying in to honor their contracts with what has become the game’s most lucrative platform.

Cricket occupies a special place in India’s psyche. Introduced by British colonialists, it inspires fanatical devotion among hundreds of millions of adherents. The IPL plays to packed crowds of at least 40,000 people a time; 462 million viewers watched matches in 2019. When U.S. President Donald Trump visited India last month, he inaugurated the world’s largest cricket stadium — a 110,000-capacity arena in Ahmedabad, in Modi’s home state of Gujarat. No other sport comes close in this part of the world.

Described by the late comedian Robin Williams as “basically baseball on valium,” cricket conjures images of Englishmen wearing whites and breaking for tea on the village green. The Indian professional variety is anything but: a high-octane, shortened version of the game (which lasts five days in its longest form) where batters in multi-colored uniforms swing for the boundaries without restraint.

The IPL’s introduction in 2008 helped India wrest control of the cricket-industrial complex from traditional powers England and Australia, and symbolizes the country’s economic rise. The league’s growth has been explosive: The IPL’s valuation was estimated at $6.8 billion by consultants Duff & Phelps in 2019, having risen by more than half since 2016. Investors in the league’s eight team franchises include Fox Corp. Chairman Lachlan Murdoch.

“Cricket is no longer a sport in India, it is a career,” M. Senthilnathan, chief coach of the MRF Pace Foundation in Chennai, told me when I paid him a visit last month after wrapping up a four-day tour with the Singapore Cricket Club. Backed by giant tire maker MRF Ltd., the foundation is dedicated to developing fast bowlers, an area of cricket in which India has been relatively deficient.

In light of how cricket’s commercial potential has blossomed, it’s tempting to question the sport’s future trajectory as India’s lockdown adds pressure on an economy that had already lost its high-growth sheen. There’s no question that India has come back to earth. Gross domestic product may rise as little as 3% in the first quarter, down from 4.7% in the final three months of last year and 8%-plus in early 2018.

Big-money cricket won’t go the same way, though. The IPL has unleashed a new approach to the game akin to that depicted in Michael Lewis’s “Moneyball.” The book (and subsequent movie) chronicled how the Oakland Athletics’ then-general manager, Billy Beane, employed data analytics to identify undervalued players and better compete against richer teams in baseball. This economic approach to cricket has bred innovation and upward class mobility.

The MRF foundation typifies that mindset. India’s problem is that it historically lacked a stable of top-line fast bowlers, Senthilnathan told me as his students honed lightning bolts in nearby nets. The country dominated spin-bowling, a slower, more artful form of delivery that’s perfect for local conditions but not as suited to the muscular tone of the modern game. MRF recruited Australian speed great Dennis Lillee to help design the foundation, which grooms players and seeks to eke out that extra few percent.

The drive to find the best young players has opened up opportunities for India’s rural population, long shut out of top-level cricket. The money that IPL has brought to the game has enabled a level of granular talent scouting and district organization that was often wanting outside the biggest cities.

Attention to detail and wringing every morsel of talent was also evident at the Center for Sports Science at the Sri Ramachandra Institute of Higher Education and Research in Chennai. Indoor nets had sensors planted into the floor to gauge how a player distributes their weight, how much tension is in each arm and leg and how to utilize that asset or minimize the drag. I counted a dozen cameras along the pitch. Up a flight of stairs, officials and data scientists sat behind a dark screen assessing information.

I came away much more optimistic about India’s cricketing future than my own (even if I did claim a few wickets on our recreational tour). Modern sport, like India itself, is too big to be knocked permanently off its stride by a virus, even one as dangerous as Covid-19.