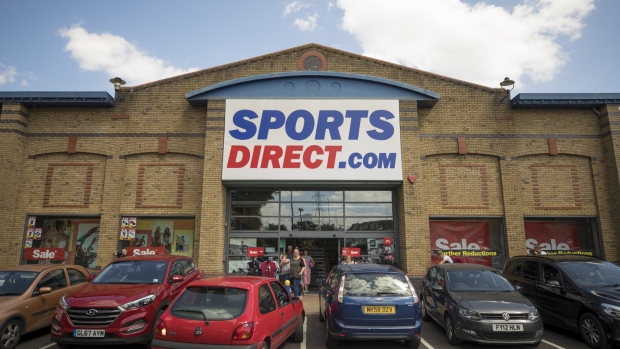 An automobile reverses from a parking space outside a Sports Direct International Plc store in Crayford, U.K. on Monday, July 29, 2019. Sports Direct plunged after the U.K. retailer reported a surprise tax bill of almost $750 million, the departure of its financial chief and deepening woes at department-store chain House of Fraser. , Bloomberg

Sports Direct has been racing to find a replacement for Grant Thornton, which quit as auditor last month following the company’s delayed posting of annual results because of a last-minute $749 million tax bill. The big four auditing firms have turned down the role, citing conflicts of interest.

Wednesday’s meeting was the culmination of a dramatic year for Ashley, who lost his 30% stake in department-store chain Debenhams in April when it was taken over by creditors. Since then, he’s said he regrets buying unprofitable retailer House of Fraser last year and has come under fire for acquiring more struggling businesses despite Sports Direct’s own profit decline.

“The failure to appoint an auditor shows that both Mike Ashley and Sports Direct’s reputation precedes them,” said independent retail analyst Richard Hyman. “They’re difficult, very unconventional and don’t play by the rules, so many firms clearly think that it’s not something they want to get involved in.”

Under U.K. law, Sports Direct can still call on the government to appoint an auditor. Ashley must do so within one week, or the company and its officers could risk a fine.

The shares traded 1.2% higher on Wednesday afternoon in London, but they’ve fallen 22% over the past 12 months.

On Wednesday, 9% of shareholders voted against Ashley’s reappointment as a director, heeding a recommendation from advisory firm Institutional Shareholder Services, which cited “material failures of governance and risk oversight.” It’s impossible to oust the billionaire, though, because he and his holding company MASH Beta Ltd. own a majority of Sports Direct shares.

“This is what happens when a business is publicly quoted and privately owned -- he can do pretty much whatever he wants,” Hyman said.

It’s a steep fall from grace for Ashley, who left school at 16 to buy a sports shop in Maidenhead, England, and expanded the business into one of the biggest retailers in the U.K. The company’s 2007 initial public offering catapulted Ashley into the ranks of Britain’s super rich with a fortune of as much as $7.1 billion, according to the Bloomberg Billionaires Index.

The first sign of trouble came about four years ago, when an undercover report alleged that Sports Direct paid some workers below minimum wage. It led to a formal government inquiry into the company’s treatment of employees, and Ashley was questioned in Parliament over his governance.

Since then, his wealth has slumped to $2.9 billion as Sports Direct’s stock sank and the U.K. retail market slowed.

To contact the editors responsible for this story: Eric Pfanner at epfanner1@bloomberg.net, Anne Pollak, John Lauerman