Spotify Technology SA started the year with slower user growth than expected for its streaming audio service, and warned its pace throughout 2021 could slip due to uncertainty related to the pandemic and the staggered reopening of society.

The owner of the world’s most popular paid audio service ended the first quarter of the year with 356 million monthly active users, nearly 6 million below what Wall Street analysts had forecast, and said it would end the year with 402 million to 422 million, also below estimates. Spotify shares fell as much as 11 per cent in New York trading Wednesday.

Growth was most affected in two markets, Brazil and Indonesia, Spotify founder and Chief Executive Officer Daniel Ek said in an interview. The company is still looking into what impact the pandemic had on its performance in those markets. While Brazil has some of the highest caseloads in the world, Indonesia doesn’t.

“It’s more of a COVID effect than anything we’re seeing in the data,” Ek said. “Quarter to quarter, there will be uncertainty because of COVID.” 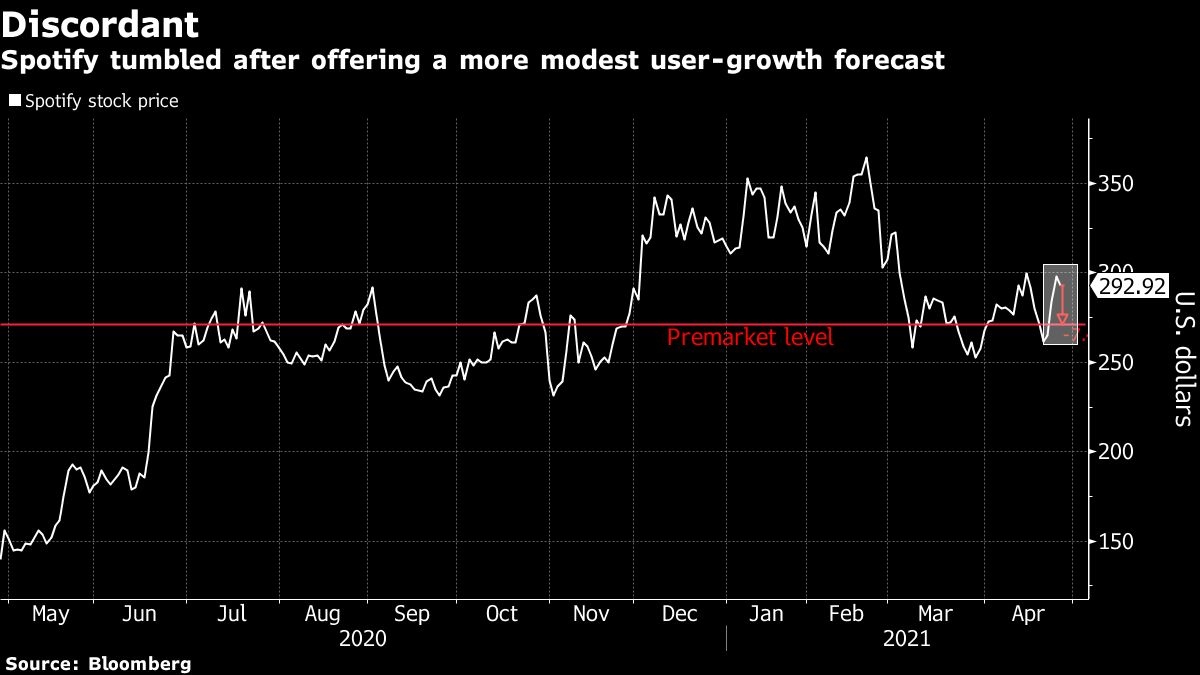 The company’s results otherwise met or exceeded its expectations. The number of paying subscribers increased to 158 million, and sales of 2.15 billion euros (US$2.59 billion) met analysts’ estimates. Advertising sales in particular were strong, growing by double-digit percentages in all of its regions at constant currencies.

The Stockholm-based company said earlier this week it would raise prices for some users in the U.S. and U.K., two of its largest markets, a positive sign for investors who’ve worried that competition from Apple Inc., Amazon.com Inc. and Alphabet Inc.’s YouTube might limit Spotify’s pricing power. As a result, Spotify forecast full-year revenue of 9.11 billion euros to 9.51 billion euros, up from a previous estimate of 9.01 billion euros to 9.41 billion euros.

“We haven’t raised prices in 10 to 15 years,” Chief Financial Officer Paul Vogel said, noting the company has added “tremendous value” for its customers over that time.

Already the world’s most popular paid music service, Spotify has in recent years added more than 2.6 million podcasts, as well as audiobooks and other non-music programming, in a bid to attract additional users and boost its advertising business. That plan has begun to bear fruit with strong increases in user additions, as well as growth in advertising.

The push has also brought some thorny situations. Spotify’s top podcaster, Joe Rogan, often touches on controversy, including when he said this past week that he understood why younger people were reluctant to get the coronavirus vaccine. Ek declined to address Rogan’s remarks beyond saying he is one of 8 million creators and the company has a content policy in place. But Spotify did single out Rogan on Wednesday for attracting users and boosting ad sales.

Shares in Spotify more than doubled last year thanks to enthusiasm about its push into podcasting and international expansion. Yet while Ek and Vogel would like investors to remain focused on the long term, shares in the company have fallen this year, and the company warned of ups and downs throughout 2021. There was one bit of good news in that for investors: The decrease in its share price helped Spotify post a profit in the first quarter, thanks to lower future expenses for employee stock options.