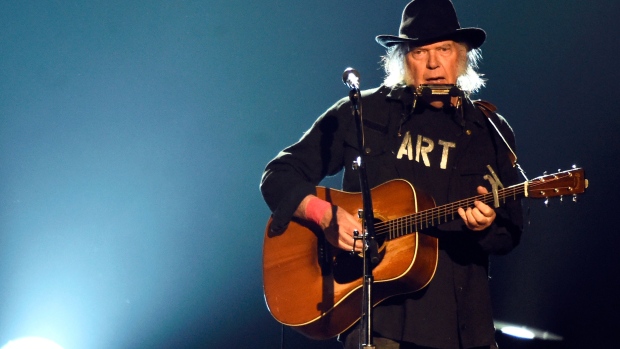 (Bloomberg) -- Spotify Technology SA is removing Neil Young’s music from its streaming service after the singer raised concerns this week that the platform’s most popular podcaster, Joe Rogan, is spreading vaccine misinformation, according to a person familiar with the company’s decision.

“I want you to let Spotify know immediately TODAY that I want all my music off their platform,” Young had wrote in a letter to his record company and management team earlier this week. “They can have Rogan or Young. Not both.”

Young removed the letter from his website but continued to negotiate with his label, Warner Music Group’s Warner Records, and Spotify, according to the Wall Street Journal, which reported earlier Wednesday on the streaming service’s decision.

The “Joe Rogan Experience” is Spotify’s most popular podcast. Spotify struck a deal with Rogan in 2020 worth more than $100 million, bringing the lucrative show exclusively to its service.

Young isn’t the only one to raise concerns about Rogan’s podcast.

Earlier this month, 270 scientists and medical professionals issued an open letter to Spotify, urging the streaming giant to establish a misinformation policy after an episode of the “Joe Rogan Experience” promoted what they said were “baseless conspiracy theories” about the pandemic. They wrote that letter in response to a Dec. 31 program featuring Robert Malone, a doctor who has called himself the “inventor” of mRNA vaccines.

Malone was banned from Twitter for circulating anti-vaccine misinformation. You Tube also deleted a recording of the Rogan podcast shortly after it was uploaded to the website by a third party.

Since the start of the pandemic, Spotify has removed 20,000 podcast episodes containing Covid misinformation. The streaming service has deleted more than 40 episodes of Rogan’s podcast — which has an estimated 11 million listeners. Young has about six million monthly listeners on Spotify.