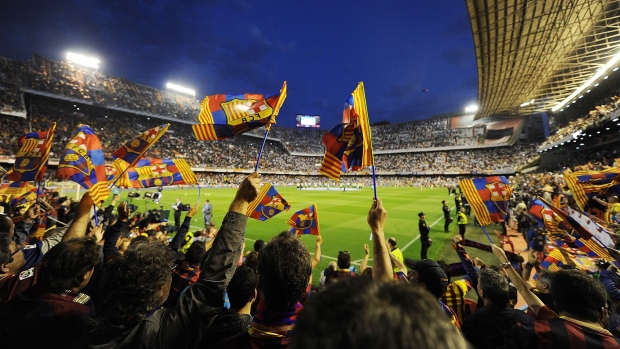 Barcelona fans cheers their team during warm-up ahead of the Copa del Rey Final between Real Madrid and Barcelona at Estadio Mestalla on April 16, 2014 in Valencia, Spain. ( , Photographer: Denis Doyle/Getty Images

(Bloomberg) -- Spotify Technology SA, the music streaming service, signed a deal to put its name on the uniforms and stadium of FC Barcelona, one of the most successful soccer teams in the world.

FC Barcelona will rename its stadium Spotify Camp Nou in July under a long-term deal that will continue through the redevelopment of the facility. Spotify’s brand will appear on players’ shirts for the next four years, beginning with the 2022-23 season, the company said in a statement. Spotify said it would also use the sponsorship to promote musical artists.

Large companies have long paid to put their names on sports venues to boost their business and benefit from the positive association fans have with their favorite teams. Reports pegged the stadium deal alone at 500 million euros ($547 million), one of the most expensive sponsorship deals in the world. The parties didn’t disclose the terms.

Barcelona needs all the financial help it can get. Though one of the most decorated soccer clubs in the world, it lost 481 million euros last year. In Spotify, it finds a company led by a soccer fanatic. Spotify co-founder and Chief Executive Officer Daniel Ek has expressed interest in buying Arsenal FC, one of the top teams in the U.K.

Barcelona only began putting advertising on its jerseys in 2006, decades after most other clubs. And the first one it featured was UNICEF, for free, as a way of signaling it was doing so for a noble cause and not for money.