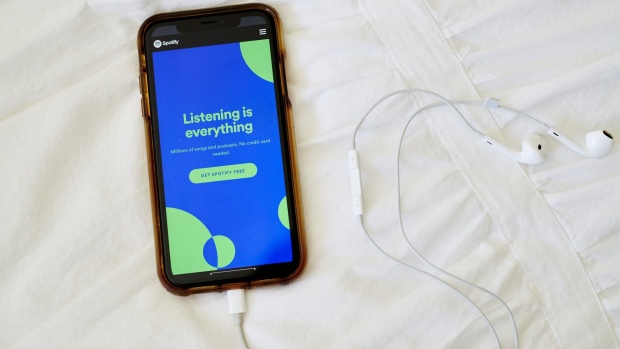 The website home screen for Spotify is displayed on a smartphone in an arranged photograph taken in Little Falls, New Jersey, U.S., on Thursday, Oct. 8, 2020. Spotify has invested hundreds of millions of dollars acquiring podcast studios such as Gimlet Media and the Ringer, hoping to attract new users and advertisers to what has been a music app. Photographer: Gabby Jones/Bloomberg , Bloomberg

(Bloomberg) -- Some seem to be backing Neil Young in removing themselves from Spotify.

#SpotifyDeleted was trending on Twitter Thursday as many claimed to be ditching the streaming service in the wake of Young’s spat with the company.

Earlier in the week the singer raised concerns that Joe Rogan, a podcaster on the platform, is spreading vaccine misinformation. “They can have Rogan or Young. Not both,” Young wrote in a letter to his record company and management team.

Young and his hit songs such as “Old Man” and “Heart of Gold” are now being removed.

The hashtag was the number three trend on Twitter in the U.S. around 2:20 p.m. New York time and had over 6,000 tweets. To be sure, not all tweets that used the phrase were specifically supporting Neil Young or actually deleting Spotify.

The “Joe Rogan Experience” is Spotify’s most popular podcast with Spotify striking a deal with Rogan in 2020 worth more than $100 million, bringing the lucrative show exclusively to its service.