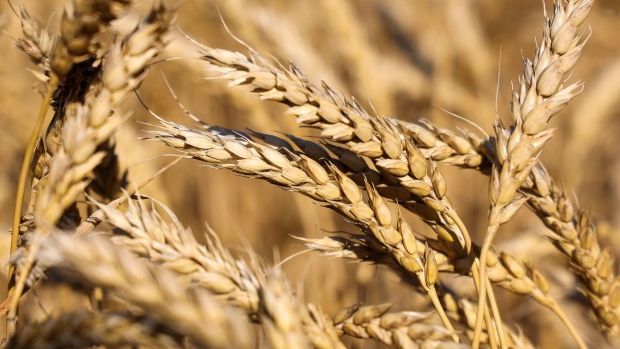 Wheat kernels during the summer harvest on a farm in Tersky village, near Stavropol, Russia, on Thursday, July 8, 2021. Farmers from Kansas to Kyiv are gearing up to collect abundant wheat crops in coming weeks, helping ease a global grain shortfall that’s fueled a surge in prices. , Bloomberg

(Bloomberg) -- Spring wheat touched $10 a bushel for the first time since 2012 after extreme drought and heat slashed this year’s production of the grain used to make pizza dough and bagels.

Overall U.S. production this year fell 44% from 2020 as farmers planted fewer acres, according to the U.S. Department of Agriculture. Yields were skimpy, with North Dakota, the biggest-producing state, shrinking by 32%.

Global wheat supplies are running short in big producing regions worldwide and the U.S. has forecast global stockpiles to end the season at a five-year low.

North America has been pummeled by hot, dry weather this season, and Russian and Kazakhstan’s spring wheat areas were also hit by drought. That curbed global production of spring wheat by 19 million tons, Dan Basse, president of consultant AgResource, said at the GrainCom conference in Geneva this week.