Uranium stocks surged to their highest levels in a decade, before paring their gains on Monday, amid a buying frenzy by Sprott Physical Uranium Trust that’s seen it amass millions of pounds of the commodity used to power nuclear reactors.

The world’s second-largest uranium producer Cameco Corp. fell 0.8 per cent, erasing earlier advance of as much as 8.5 per cent in Toronto, highest intraday since March 2011. Other uranium-linked stocks pared their earlier gains including Denison Mines Corp. and NexGen Energy Ltd.

Uranium producers have been rising since last year due to COVID-19 related supply disruptions, demand for the commodity from nuclear reactors and excitement from the retail crowd. The rally gathered momentum in the past two months as the Sprott fund started purchases that propelled the heavy metal to an almost seven-year high.

“It is not a secret that investors’ newfound interest in uranium, predominantly through Sprott’s physical uranium trust, is the driving force behind its resurgence,” Morgan Stanley strategists Marius van Straaten and Susan Bates wrote in a note. 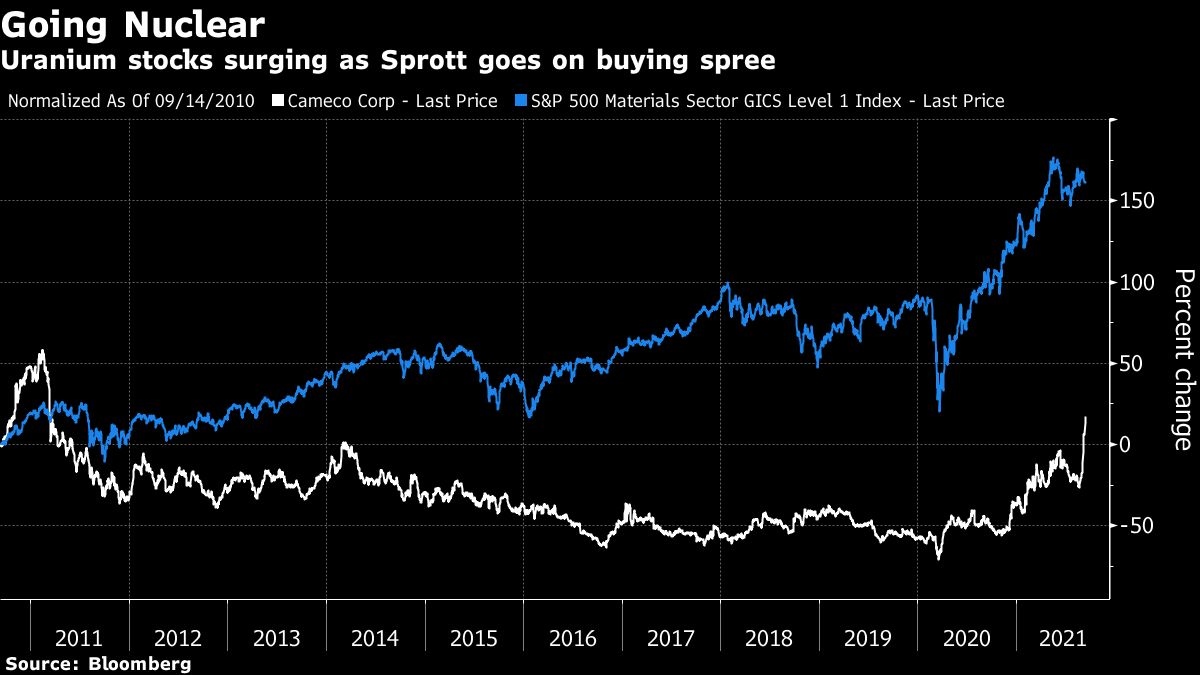 The newly-formed Sprott fund started buying the commodity on the spot market in mid-August and has amassed over 24 million pounds of uranium, sometimes buying more than 500,000 pounds in a single day, according to its website and social media account.

Moving forward, investors are likely to focus on the sustainability of such a rally as the supply and demand fundamentals of the commodity haven’t changed since Sprott started buying. “While coal and natural gas prices are driven up by actual market tightness, uranium’s underlying supply-demand fundamentals haven’t meaningfully changed over the last few months to warrant this price surge,” Morgan Stanley’s analysts wrote.

The analysts added that bulls on the sector don’t see prices falling, even if the buying spree by the fund slows down, while noting that “better visibility of previously hidden uranium stocks could become an overhang to the market, with outflows from physical funds also a potential risk.”