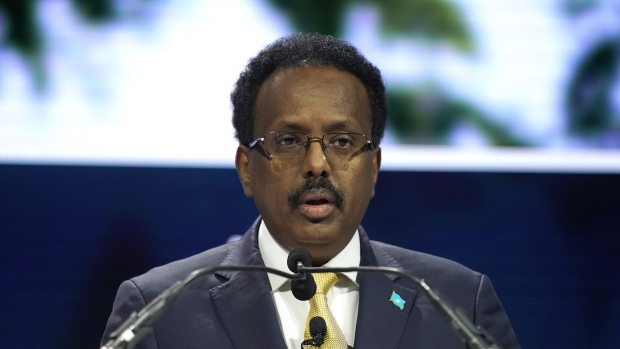 (Bloomberg) -- Somali President Mohamed Abdullahi Mohamed ordered an investigation into the death an intelligence agent, amid mounting public anger and a widening rift with the nation’s prime minister over her case.

The announcement followed criticism of the president because of his hesitancy to probe the disappearance of 24-year-old Ikran Tahlil, a cybersecurity expert at the National Intelligence and Security Agency who was abducted in June. Intelligence officials said last week Tahlil was killed by the al-Qaeda-linked militant group al-Shabaab, though the insurgents denied any involvement.

The spat between the two men exposed a faultline within the highest echelons of Somalia’s government that threatens to increase instability as the country struggles to rebuild its economy after two decades of civil war and then a 15-year insurgency by al-Shabaab. U.S. Director of National Intelligence Avril Haines on Monday said Somalia is one of four nations that pose the greatest terror threat to America, along with Iraq, Syria and Yemen.

Farmajo plans to seek a new mandate in elections scheduled for October. The vote is being held after his failed attempt to extend his term in office.

Following the intelligence agency’s report of Tahlil’s death, the president opposed a decision by the premier to fire the nation’s spy chief Fahad Yasin, who had backed Farmajo as he rose to power in 2017 and previously served as the president’s top intelligence adviser.

In turn, Roble last week ordered the Finance Ministry not to draw funds disbursed by the International Monetary Fund last month to the central bank, hamstringing the state’s ability to spend in the run-up to the vote. He also fired Internal Security Minister Hassan Hundubey Jimale, another close ally of the president.

The investigation into Tahlil’s death faced criticism from opposition lawmakers including Amina Mohamed of the Union and Peace for Development Party, who questioned the inclusion of NISA officials in the commission probing her disappearance.

“It seems that the president is trying to cover up the facts that point toward him or his close ally Fahad being involved,” she said.

Qali Mahmud, the mother of the spy, told reporters late Monday that she was “strongly opposing” the inquiry committee appointed by Farmajo.

“We filed our case before the military court,” she said. “We will only be convinced by that.”