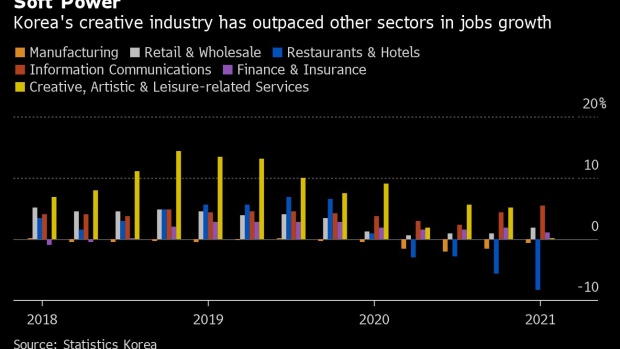 (Bloomberg) -- Netflix Inc.’s runaway hit Squid Game came like a bolt from the blue for viewers around the world. The impact on equity investors in its home country of South Korea is proving equally intense.

While the nation’s benchmark share index has dropped about 4% since the drama was released in mid September, dozens of stocks in the vibrant entertainment sector spanning K-pop bands to cinema have gone into overdrive.

Korea is best known to consumers in the U.S. and Europe for its Samsung smartphones and Hyundai cars, but closer to home in Asia it is also a force in cultural exports like film and music. The hope now in Seoul is that Squid Game’s success helps take this industry global.

“The stage has been set for ‘K-dramas’ and content to expand and reach an even wider audience,” said Lee Sang-Hun, a senior analyst at HI Investment & Securities Co. in Seoul. “The shares of companies in this area -- large-caps and small-cap -- reflect these expectations.”

Bucket Studio Co., which holds a stake in an agency that represents lead actor Lee Jung Jae, has rallied about 35% since the series was released on Sept 17. Squid Game producer Siren Pictures Inc. isn’t listed.

Studio Santa Clause Entertainment Co., the producer of the crime series My Name, is up about 50%, having surged 30% in one particularly feverish day of trade.

All up, this has brought a 23% rally in the Kosdaq Recreation & Culture Index since Squid Game’s release, easily beating the broader market.

Global funds added a net 106 billion won ($90 million) worth of stocks in the Kosdaq culture sub-gauge from the same starting point, according to data compiled by Bloomberg through Oct. 22. Local retail investors bought a net 257 billion won worth, the data show.

“A lot of things helped make Squid Game a success,” said Shin Su-Yeon, an analyst at Shinyoung Securities Co. “We can’t ignore the impact of groups like BTS and Blackpink -- pop artists who have played a role in rousing curiosity in Korean culture.”

To be sure, the foundations for the current strength of the sector go back a long way, at least as far back as the presidency of Kim Dae-jung in the late 1990s. Policy makers then recognized the potential for the entertainment industry and brought in rules and tax incentives to promote local content.

Filmmakers and recording studios also learned quickly that without the huge local audiences like their neighbors Japan and China, to flourish they needed to produce songs, movies and dramas that appealed overseas, according to Kim Do Hoon, a Seoul-based film columnist.