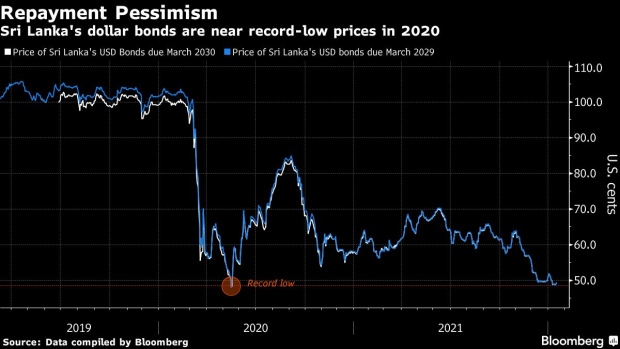 (Bloomberg) -- Global investors are growing more skeptical that Sri Lanka will be able to repay its long-term debt as the island nation turns to bilateral aid to help it meet obligations.

The South Asian country’s dollar bonds maturing toward the end of this decade are trading near record lows and default risk is holding near an all-time high, data compiled by Bloomberg show. The first test would be a $1 billion maturity in July, which policy makers say they will repay in time after drawing down a swap facility from China to help meet a $500 million payment this week.

President Gotabaya Rajapaksa’s administration is looking to China and India for financial assistance, with the pandemic slamming crucial tourism revenue and making it hard to pay for key food imports. Rajapaksa is also loathe to go to the International Monetary Fund for a bailout, choosing instead to boost pay for state employees and soothe public anger as inflation accelerates.

“While in theory they should be able to repay debt maturing in July this year from the FX reserve, this will certainly affect the repayment of debts later on,” said Arthur Lau, head of Asia ex-Japan fixed income at PineBridge Investments in Hong Kong. “Talk of obtaining a meaningful bilateral financing arrangement do not seem sufficient right now.”

Sri Lanka’s reserves stood at $3.1 billion last month. It has external obligations of $6.9 billion for 2022, including the $500 million bonds repaid Tuesday and the July notes, according to Fitch Ratings.

Losses in Sri Lanka bonds have accelerated in the last six months with a drop of almost 19%, the most among 10 sovereign emerging-market dollar bond markets in Asia, according to a JPMorgan Chase & Co. index.

Ek Pon Tay, BNP Paribas Asset Management’s senior portfolio manager in Singapore, predicts Sri Lanka will raise interest rates when it reviews policy Thursday. Three of six economists surveyed by Bloomberg expect no change, while the rest predict tightening of at least 50 basis points. The island nation’s inflation rate is among the fastest in Asia at more than 12%.

Tay said the country’s ability to repay its July bond is “less certain” than the January repayment. Sri Lanka will face an “uphill battle” to repay the debt, according to Nivedita Sunil, a fund manager at Lombard Odier. Citigroup Global Markets Inc. warned in a note this month there’s rising risk of a “future potentially disorderly default” in Sri Lanka.

“We have not held Sri Lankan debt for close to a year, troubled by the current-account developments -- much weaker tourism and remittances than expected, weak economic growth and lack of commitment to an IMF program, which we would see as essential,” said Matthew Vogel, London-based portfolio manager and head of sovereign research at FIM Partners.