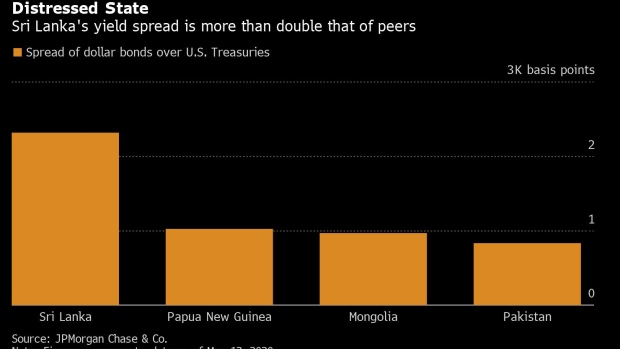 (Bloomberg) -- Sri Lanka’s dollar bonds have been the worst-performing sovereign notes in Asia this year. But BNP Paribas Asset Management and Union Investment Privatfonds GmbH say it might now be time to buy.

The comments come after Treasury Secretary S.R. Attygalle told Bloomberg News on March 31 that the country has “several streams of inflows in the pipeline to repay debt falling due this year.” That helped push back against uncertainty amid the Covid-19 pandemic, which had left the debt-laden nation looking particularly vulnerable.

There have been other potentially positive developments. The nation is in talks with the International Monetary Fund and the Asian Development Bank for funds. It also expects about $800 million from China and a $400 million swap line from India to bolster reserves.

“We are positive on the credit, and the willingness to pay remains strong,” said Jean-Charles Sambor, head of emerging-markets fixed income at BNP Paribas Asset Management in London. “The Covid-19 situation had much more macro impact on Sri Lanka than other Asia frontier markets, given its significant refinancing needs and relatively unfavorable debt trajectory.”

Risks, of course, still abound. The South Asian nation was downgraded deeper into junk territory in April by Fitch Ratings, which said the pandemic will worsen its already-rising debt sustainability challenges. Sri Lanka in March joined emerging-market nations whose debt is in distressed territory. Its dollar bonds have lost about 46% this year, more than any other country in Asia.

Attygalle’s comments helped the bonds gain briefly in early April. But the rally fizzled after the subsequent Fitch cut and after Moody’s Investors Service placed the nation on review for downgrade last month.

Investors such as Aberdeen Standard Investments and Loomis Sayles Investments Asia are staying away from Sri Lankan securities until there is more clarity on how the country will address its fiscal situation and whether it would still be committed to reforms under an IMF program.

“Sri Lanka has demonstrated in the past that it is a country that honors its debt commitments, even through tough times, but these are exceptional times,” said Thu Ha Chow, Singapore-based fund manager for Asia credit strategies at Loomis.

Union Investment, though, is among investors who see positive signs.

“We don’t expect them to default, do see willingness to pay and think that the current spread level is fair enough to re-engage at least without being too bullish or overly optimistic,” said Christian Wildmann, head of emerging-market debt for the firm in Frankfurt.