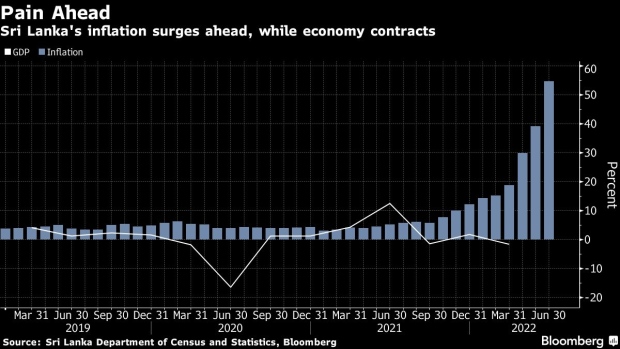 (Bloomberg) -- Sri Lanka’s central bank raised borrowing costs in a bid to rein in record prices that have stoked Asia’s fastest inflation and support the currency.

“The Board was of the view that a further monetary policy tightening would be necessary to contain any build-up of adverse inflation expectations,” the central bank said in a statement.

The decision comes as prices continued their record rise in June driven by persistent shortages due to fast depleting foreign exchange reserves. Prime Minister Ranil Wickremesinghe told parliament Tuesday, that the inflation rate will hit 60% in the coming months amid rising commodity prices and a declining currency.

Prior to Thursday’s decision, the country’s central bank had raised interest rates by 850 basis points since the beginning of the year, even as its economy contracted in the first quarter, marking the beginning of a painful and long recession for the country. Economic activity has also come to a grinding halt as the bankrupt nation asked residents to stay home until July 10 to conserve fuel.

“Domestic economic activity during the second quarter of 2022 is expected to have been severely affected by the continued supply side disruptions, primarily due to the shortages of power and energy,” the central bank said.