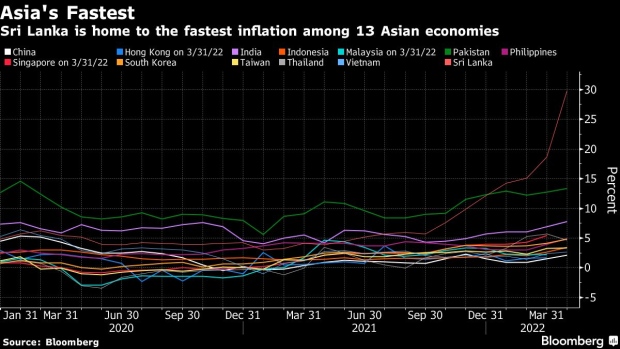 (Bloomberg) -- Sri Lanka’s central bank held borrowing costs steady as it waits for previous tightening to filter through the economy, which is currently experiencing Asia’s fastest inflation and sliding further into a debt crisis.

The Central Bank of Sri Lanka held its benchmark standing lending rate at 14.5% on Thursday. Three out of eight economists in a Bloomberg survey expected a hold, while five forecast hikes of up to 300 basis points.

The central bank said in a statement that policy measures unveiled last month, including a 700 basis-point rate increase and other steps to stem demand pressures, are expected to contain a further build-up of inflation expectations. It sees inflation staying elevated in the coming months and economic activity taking a hit.

The rupee was little changed after the decision was released, while sovereign dollar bonds due July was indicated 0.65 cents higher at 43.21 cents on the dollar.

The central bank’s 850 basis points of rate increases this year so far appear to have done little to cool inflation, currently running at almost 30% -- a product of shortage of everything from food to fuel as the nation struggles to pay for imports. With a dwindling supply of dollars, Sri Lanka is set to default on overseas bonds this week as efforts to secure emergency aid from overseas were upset by political turmoil at home.

President Gotabaya Rajapaksa, who is facing calls to quit over mismanagement of the economy, named Ranil Wickremesinghe as the new prime minister but is yet to name a finance chief to resume talks with the International Monetary Fund for bailout funds.

“Policy measures implemented by the central bank need to be reinforced by adequate and timely policy adjustments by the government,” the central bank said. “Urgent measures are required to restore greater political stability.”

(Updates with central bank’s comments in the third paragraph.)