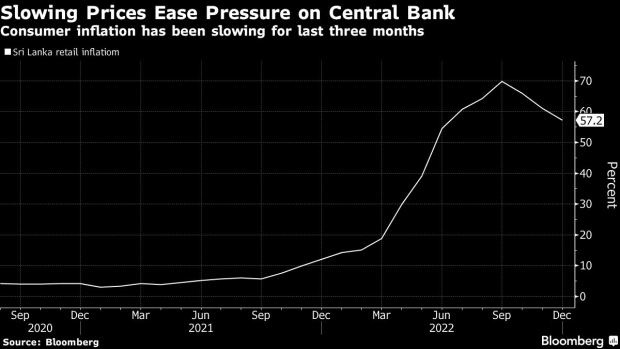 The Central Bank of Sri Lanka held the standing lending facility rate at 15.5% on Wednesday, a move predicted by all five economists in a Bloomberg survey.

“The maintenance of the prevailing tight monetary policy stance is imperative to ensure that monetary conditions remain sufficiently tight to rein in inflationary pressures,” the central bank said in a statement on its website. “Tight monetary conditions, together with the tight fiscal policy, are expected to adjust inflation expectations downward.”

The decision came a day after Governor Nandalal Weerasinghe said policymakers are starting to see disinflation and price gains should ease to single-digit levels by the end of 2023. Last year’s steep tightening of 950 basis points minimized further damage to an economy that’s now seeing tourism and remittances pick up, bringing much-needed foreign currency inflows to help tide the country over, he said Tuesday.

What will move the needle for the island nation in recession is the $2.9 billion International Monetary Fund program that has been delayed. The IMF bailout will unlock more financing and should set the nation into a more sustainable recovery path.

Some relief is in sight. Two of Sri Lanka’s three major bilateral creditors — China and India — have indicated their willingness to support the nation’s debt recast, with Japan yet to give a word. The IMF needs the support of Sri Lanka’s offficial creditor nations before approving the bailout. Discussions on domestic debt will ensue after, the central bank chief said on Tuesday.

Cooling inflation provides the monetary authority more scope to support an economy that ground to a halt last year following the debt crisis. Price gains eased for a third month in December to 57.2% and is expected to keep on decelerating until they reach the ideal level of 4%-5% toward the end of the year, the central bank said earlier this month.

A contractionary fiscal policy is augmenting the effects of last year’s tightening — reducing the need for additional hikes. We expect the CBSL to keep rates at current levels through 2023.

The monetary authority is seeing signs that excessive market interest rates are easing as liquidity improves and investor sentiment recovers in anticipation of “financing assurances” from official creditors, it said Wednesday. There’s been “notable moderation” in yield on government securities along with deposit rates, paving the way for further easing in market rates, it said.

The central bank also expects a gradual economic recovery in the latter part of 2023 after falling deeper into recession last year, aided by inflows as overall sentiment improves. The external sector remains resilient despite heightened challenges, it said.

(Updates with comments from the statement in third paragraph)