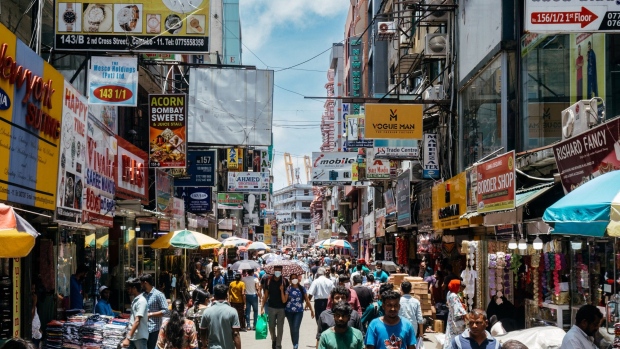 (Bloomberg) -- Sri Lanka kept borrowing costs unchanged for a second straight meeting, as the central bank judged the current level of interest rates to be tight enough to nudge inflation down in an economy already in the grip of a recession.

The Central Bank of Sri Lanka held the standing lending facility rate unchanged at 15.5% on Thursday, a move predicted by four of five economists in a Bloomberg survey, with one expecting a 150 basis-point increase.

The decision comes as policy makers seek to limit the impact of a deepening economic downturn and crippling shortages, having already raised the key rate this year by 9.5 percentage points to rein in Asia’s fastest inflation. In tandem with fiscal policy tightening, the central bank sees current monetary measures helping prevent any build-up in demand pressures.

Authorities expect previous rate hikes to help achieve its envisaged disinflation path. Headline inflation, currently at a record nearly 70%, is seen returning to the central bank’s 4%-6% target over the medium-term, the CBSL said in a statement.

“Subdued aggregate demand pressures resulting from tight monetary and fiscal conditions, expected improvements in domestic supply conditions, normalization in global food and other commodity prices, and the timely passthrough of such reductions to domestic prices, along with the favorable statistical base effect, will be instrumental in bringing down inflation,” it said.

A preliminary agreement with the International Monetary Fund for a $2.9 billion loan and the start of restructuring talks with international creditors are sparking some optimism that the bankrupt South Asian economy is turning a corner.

Gross domestic product contracted an estimated 4.8% in the first half of 2022 and is expected to stay that course in the second-half as well, the CBSL said, adding that a recovery in economic activity is possible next year aided by reforms and easing supply challenges.