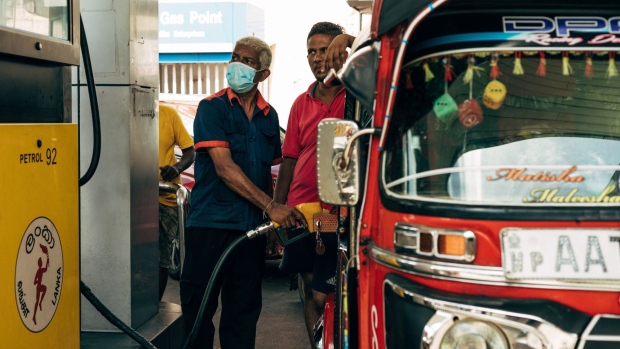 A three wheeler vehicle gets petrol pumped at a petrol station near the High Level Road in Colombo, Sri Lanka, on Sunday, May 22, 2022. Sri Lanka’s dollar bonds due July rebound after Friday’s drop, up almost 5 cents on the dollar in the biggest gain since October, as the government holds bailout talks with the IMF. , Bloomberg

(Bloomberg) -- Bankrupt Sri Lanka is offering a guaranteed fuel quota to any company that can pay in dollars.

Potential purchasers must pay as much as a month in advance to open a consumer account at state-run Ceylon Petroleum Corp., Energy Minister Kanchana Wijesekera tweeted on Sunday. Fuel will be issued on a daily or weekly basis from July 12, according to the minister.

Sri Lanka has closed public schools and offices through July 10 to conserve fuel as the nation doesn’t have the dollars to pay for imports. Roads across the island have been deserted, even as thousands of vehicles continue to queue for kilometers waiting for filling stations to be replenished.

“I see this recent announcement by the ministry of power and energy as the natural progression of increased dollarization in Sri Lanka to meet its near term challenges,” said Deshan Pushparajah, head of global markets and investment banking at CAL Sri Lanka. “Dollar preference on the part of the Ceylon Petroleum Corp may drive its larger customers, including the Ceylon Electricity Board, to also make similar pronouncements in the coming weeks.”

Sri Lanka has announced plans to allow foreign companies to distribute fuel and let marine bunker operators sell diesel and furnace oil to export companies in dollars in a bid to ease the crippling shortages. The energy minister also traveled to Qatar last week to try to secure fresh supplies while the government is hoping for approval from India of a $500 million credit line for fuel imports.

The authorities are also exploring the possibility of conducting tea auctions in dollars, the plantation minister said in parliament last month. Local media has also reported that shipping agents have requested exporters to pay freight in dollars, while airlines have started to denominate tickets in dollars instead of the local currency.