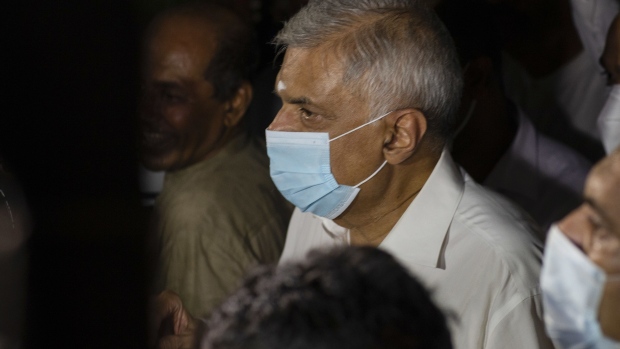 Ranil Wickremesinghe, newly-appointed Prime Minister of Sri Lanka, visits a Buddhist temple to receive blessings in Colombo, Sri Lanka, on Thursday, May 12, 2022. Wickremesinghe, a veteran lawmaker and former premier, has been named Sri Lanka’s next prime minister days after the last incumbent, the brother of President Gotabaya Rajapaksa, resigned in the face of escalating anger with the deepening economic crisis. , Bloomberg

(Bloomberg) -- Sri Lanka’s newly appointed Prime Minister Ranil Wickremesinghe will double up as finance minister leading bailout talks with the International Monetary Fund, according to people with knowledge of the matter.

Wickremesinghe, who was appointed this month following violent unrest, could be officially appointed as early as Wednesday morning in Colombo, the people said, asking not to be identified before a formal announcement. Wickremesinghe will also be minister for Economic Stabilization and National Policies, the people said.

Wickremesinghe has held talks with foreign envoys, including from India, China and the U.S., and discussed with representatives from the Asian Development Bank and World Bank ways to replenish food, fertilizer and medicine supplies. Sri Lanka needs $4 billion over the next eight months to pay for essential imports.

The island nation has fallen into default for the first time in its history after the expiry of a 30-day grace period for missed interest payments on two of its sovereign bonds. The country’s central bank also warned that headline inflation will worsen to 40% in the next few months.

The move to appoint Wickeremesinghe as Finance Minister comes as opposition parties refused to take key cabinet roles in the so-called unity government, highlighting the risk of further political instability ahead. Public protests continue, calling for President Gotabaya Rajapaksa to step down following the resignation of his brother -- and Wickremesinghe’s predecessor -- Mahinda Rajapaksa.

As a member of the opposition, Wickeremesinghe had criticized the president’s policies, pointing to falling foreign-currency reserves and flagging early on that the government should seek help from the IMF.

Besides scouting for funds and tackling Asia’s highest inflation, he will have to raise taxes to bridge the widening gap between revenue and expenditure.