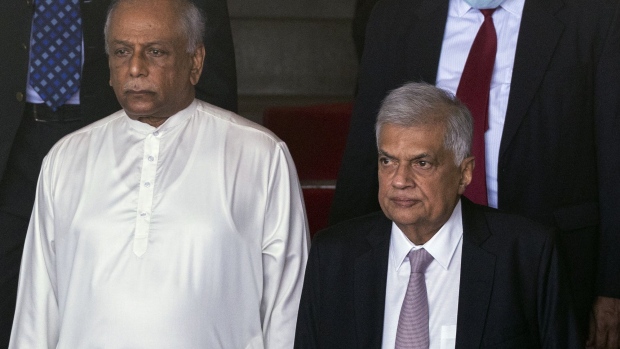 (Bloomberg) -- Sri Lanka’s government tabled a proposal to curb the powers of the president’s office, the first step to reform a political system widely seen as responsible for tipping the country into economic chaos and bankruptcy.

The passing of the proposed constitutional amendment would be a win for President Ranil Wickremesinghe and buy him time to institute tough economic reforms to secure a bailout from the International Monetary Fund as the country struggles to find funds for food and fuel supplies.

Wickremesinghe had promised to follow through with the changes in the presidency -- a key demand from protesters and lawmakers who say the sweeping powers of the executive led to missteps by the former leader Gotabaya Rajapaksa’s administration.

Under Rajapaksa, the constitution was amended to give him wide-ranging powers to appoint and dismiss ministers. The new proposals aim to give more oversight to parliament, restore independence to commissions in decision making and prohibits Sri Lankans with dual citizenship from holding office.

Justice Minister Wijedasa Rajapaksa tabled the bill, known as the 22nd amendment to the constitution, in parliament on Wednesday. The latest amendment approved by cabinet last week, will need the votes of two-thirds of the members of parliament to become law. It can be challenged in the country’s top court within a week of being placed in parliament.

Rajapaksa fled to Singapore last month following monthslong protests in Sri Lanka that saw demonstrators enter his home and offices. He stepped down as president soon after but is widely expected to return to the island nation.

In his inaugural speech to parliament last week, Wickremesinghe, who was elected president with the support of lawmakers from Gotabaya Rajapaksa’s party, called for support for his administration’s measures to help pull the nation out of its economic tailspin.

However, Wickremesinghe has also used the powers of the presidency to impose emergency rule and police have arrested several protesters for their involvement in demonstrations that forced out Rajapaksa.

Many in the protest movement have called for Wickremesinghe’s ouster as well, saying that he would not hold the former president accountable for economic mismanagement in a country where foreign exchange reserves remain low and inflation has stayed above 60%.

A day before the proposals were tabled in parliament, a planned protest appeared to have lost steam as the government cracked down and cleared out several protest sites, including an iconic ocean-front area that was the heart of the anti-Rajapaksa anger. People are also focused on securing supplies of fuel and cooking gas that have started to trickle into the country. That was a marked change from the anger in the months before when people had to queue for hours to secure these essential items.