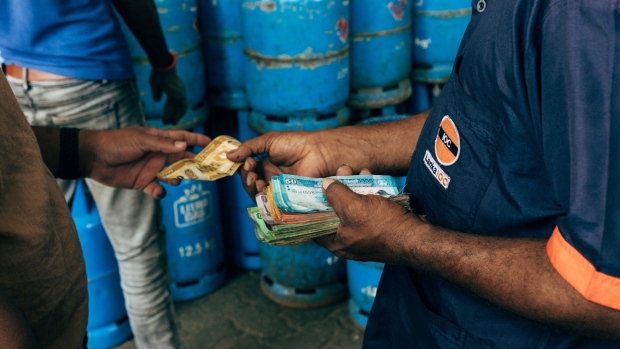 A clerk hands changes at the Pellawatte Litro Gas filling station in Colombo, Sri Lanka, on Sunday, May 22, 2022. Sri Lanka’s dollar bonds due July rebound after Friday’s drop, up almost 5 cents on the dollar in the biggest gain since October, as the government holds bailout talks with the IMF. Photographer: Jonathan Wijayaratne/Bloomberg , Bloomberg

(Bloomberg) -- Sri Lanka’s foreign exchange reserves further dried up in July as the nation kept on drawing from its dollar pile to buy fuel and other essentials.

Official reserves dropped to $1.82 billion at end July from $1.86 billion reported for the previous month, according to data released by the central bank.

The amount includes a $1.5 billion swap arrangement with China that Sri Lanka can only access if overall reserves rise to a certain level.

The decline in the stockpile comes amid fears of a delay in an International Monetary Fund bailout due to lingering political uncertainties even as the new President Ranil Wickremesinghe vowed to revive the economy and pursue a debt restructuring with the IMF.

Sri Lanka has about $12.6 billion in outstanding bonds owed to global funds; it owes roughly an equivalent amount to bilateral creditors and multilateral lenders.