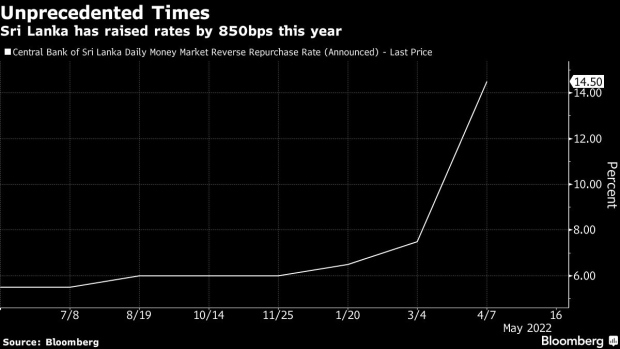 (Bloomberg) -- Authorities in Sri Lanka this week are expected to name a new finance minister and raise interest rates as they struggle to stabilize an economy spiraling into chaos by a lack of dollars and surging inflation.

Click here for the latest on developments in Sri Lanka

Meanwhile, the Central Bank of Sri Lanka is expected to raise its benchmark standing lending rate by 75 basis points on Thursday from 14.5%, the median in a Bloomberg survey shows as of Tuesday, as it tries to battle Asia’s fastest inflation.

The decisions come as the South Asian country barrels toward its first official default, with the 30-day grace period for missed interest payments on dollar bonds ending Wednesday.

The prime minister on Monday warned that the country was down to its last day of gasoline supplies, as it doesn’t have the dollars to pay for shipments aboard tankers anchored just offshore. He also said it would need to print money to pay government salaries, a move that will certainly worsen inflation already running near 30%.

“Facing a cratering currency and the risk of hyperinflation, the Central Bank of Sri Lanka is sure to hike rates further -- crushing growth. But we think the worst of the inflation storm will pass fairly quickly. The prospect of consumer price gains cooling into 2023 should allow the central bank to limit its remaining rate increases to 400 basis points.”

Sri Lanka is suffering a shortage of food, medicine and energy while its currency has been in a free fall, fueling protests and violence that pushed Prime Minister Mahinda Rajapaksa to resign last week. His brother Gotabaya, the president, appointed long-time opponent Wickremesinghe in a bid to calm the situation and restore order. Central bank Governor Nandalal Weerasinghe had earlier threatened to resign if political stability wasn’t established.

The country’s monetary authority has raised interest rates by 850 basis points so far this year. Meanwhile, the currency has lost more than 40% against the dollar since the end of February, while its foreign exchange reserves dipped 4.7% in April to $1.8 billion. Officials, however, warned earlier this month that the country has about $50 million in usable reserves.