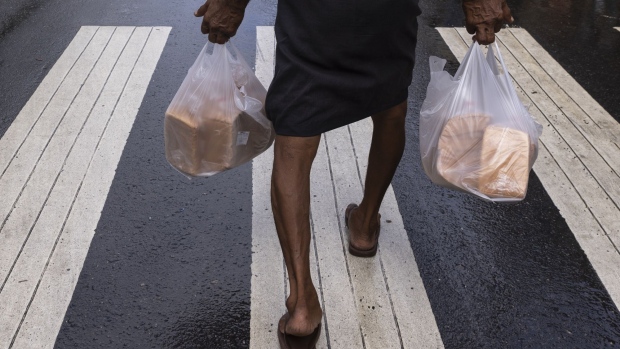 A man carries two bags of bread in Colombo, Sri Lanka, on Monday, May 16, 2022. Sri Lanka has been rattled by power cuts, food shortages, and a currency in free fall, which fueled protests and pushed Prime Minister Mahinda Rajapaksa to resign. , Bloomberg

(Bloomberg) -- Sri Lanka’s central bank sees headline inflation accelerating to 40% in the coming months, as the country struggles to pay for imports to ease shortages of everything from food to fuel.

The central bank is monitoring underlying inflation that strips out volatile items, which has been responding well to policy settings, Central Bank of Sri Lanka Governor Nandalal Weerasinghe said at a briefing in Colombo Thursday.

The central bank earlier Thursday left interest rates unchanged as it waits for previous increases to filter through the economy. The CBSL has raised the key rate by 850 basis points since the start of the year to combat inflation, which is running at almost 30% now.