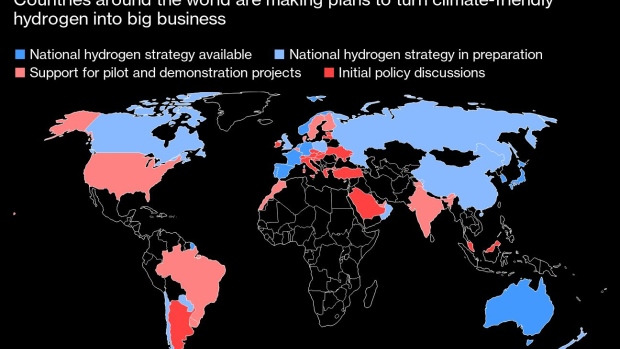 (Bloomberg) -- Norwegian energy major Equinor ASA will work with SSE Plc to develop two new low-carbon power plants in the most polluting part of the U.K, including the first in the world running on hydrogen.

Britain needs to find new ways to decarbonize its economy in order to meet its net zero emissions target for 2050. Technologies such as hydrogen and carbon capture and storage, which remove and reduce the pollutants created by burning fossil fuels, will play a key role.

The stations will be built in the Humber region in the north of England, where large industrial plants dominate the landscape. They will use the infrastructure being built through the Zero Carbon Humber initiative, that both companies are part of. The scheme received government funding in March.

“By utilizing cutting-edge carbon capture and hydrogen solutions, we can decarbonize power generation, heavy industry and hard-to-reach sectors of the economy,” Stephen Wheeler, managing director of SSE’s thermal business said in a statement.

Britain needs to cut emissions 78% by 2035 to be on track for its net zero goal. This will mean limiting use of fossil fuels that don’t use carbon-reducing technology.

Humber and Teeside, regions that make up nearly half of the U.K.’s industrial emissions, are emerging as front runners for developing CCS projects in Britain. The government says it will fund at least one power project equipped with technology that captures the emissions and stores them permanently under the seabed, starting with 1 billion pounds ($1.3 billion) by the middle of the decade.

CCS is crucial in securing the future of large gas plants in the electricity mix. Overall, the U.K. wants to capture 10 million tons of carbon dioxide a year by 2030. So far the technology has not been delivered anywhere at in the world successfully at a competitive price.

“Equinor strength is in natural gas,” said Lydia Rainforth, an analyst at Barclays Plc. “We would expect the natural gas used in these projects to come from Equinor, and the carbon capture side also to be a key role. The announcement of further development of blue hydrogen in the U.K. is encouraging.”

As part of the agreement announced on Thursday, SSE and Equinor are also developing options for hydrogen blending at SSE’s Keadby-2 project which is already under construction. The companies also have the intention to collaborate on projects elsewhere in the U.K., they said.

Keadby-2 is due to start commercial operations next year and could be the last large-scale gas plant to be built in Britain that doesn’t have low carbon technology.

Keadby-3 could be online by 2027 and Keadby Hydrogen before the end of the decade, the companies said, without disclosing how much the two plants would cost.

“These world-leading power plants at Keadby will accelerate efforts across the Humber to create a decarbonized industrial cluster, and contribute to the UK’s goals for a green industrial revolution and reaching net zero,” said Grete Tveit, senior vice president for low carbon solutions at Equinor.