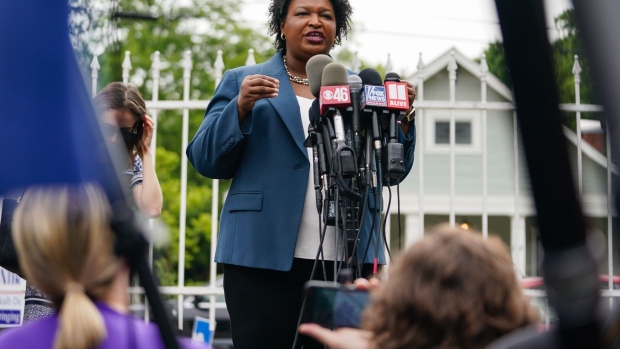 Stacey Abrams, Democratic gubernatorial candidate for Georgia, speaks during a news conference in Atlanta, Georgia, US, on Tuesday, May 24, 2022. The latest test of Donald Trump's sway over Republican voters will be on display Tuesday night in Georgia's crucial primary race. , Bloomberg

(Bloomberg) -- Stacey Abrams was the star of Georgia’s final Republican gubernatorial primary debate, even though she was nowhere near the event. During the 55-minute televised debate, the five candidates on stage mentioned Abrams by name 25 times.

The state’s Republican voters have now selected incumbent Governor Brian Kemp as the party’s nominee. And Abrams, who ran unopposed for the Democratic nomination, is once again the biggest attraction in Georgia politics. Early polls show Abrams trailing the incumbent governor by about 5 percentage points. In 2018, Abrams lost to Kemp by a margin of less than 1.5 points.

But for Kemp and Republicans throughout the state and around the country, Abrams is a handy talisman and symbol of the so-called “woke mob,” this campaign season’s derisive euphemism for race and the issues that cut across racial lines. A political lightning rod in the same fashion of Hillary Clinton or the late Ted Kennedy, Abrams is being utilized by her opponents to invoke fear and loathing among voters.

“She’s being used as the goblin,” said Charles Bullock, an emeritus professor of political science at the University of Georgia. “She’s used as the scary person who’s going to frighten you into voting Republican.”

Meanwhile, Democrats are hopeful that Abrams’ popularity among base voters is strong enough to overcome any voter malaise amid President Joe Biden’s sagging approval rating, which fell to 39%, the lowest point of his presidency, according to an AP-NORC poll released Friday.

She’s an expert organizer of voters, a best-selling novelist and a graduate of Spelman College and Yale Law School. She shot to national fame after she nearly defeated Kemp four years ago, and she is the candidate who, if successful in November’s general election, would become the nation’s first Black female governor.

“Stacey knows what she did very well in 2018, and she knows what she has to do this year to win,” said Tharon Johnson, an Atlanta-based political strategist. “She’s got to figure out a way to expand her base. Her ability to connect with people on the ground is unmatched.”

Although he was running first and foremost against Kemp for the GOP gubernatorial nomination, former Senator David Perdue dubbed his inaugural campaign around the state the “Stop Stacey Tour.” Former President Donald Trump, who has given Abrams the nickname “Stacey the Hoax,” counted Abrams among those who he says worked to “steal” the 2020 election from him. And on StopStacey.org, an organization launched by Kemp supporters over a year ago, Abrams is called “a leader of the radical left” and a “champion of a socialist, anti-American agenda,” who is “on a mission to destroy our country.”

As a parting shot, Perdue in his concession speech, pledged to do whatever was needed to help Kemp defeat Abrams.

“We’re going to do everything we can to make damn sure Stacey Abrams doesn’t take over this state,” Perdue said Tuesday night.

Standing outside a church and polling place in east Atlanta and surrounded by microphones and cameras, Abrams declined to respond to Perdue’s comments. Her criticism of Kemp, she said at the event, was “an inelegant delivery of a statement that I will keep making and that is that Brian Kemp is a failed governor.” Abrams said that after listening to Republicans “for the last six months attack me” that Tuesday’s election results marked “the beginning of the next phase of this campaign where we fight together for one Georgia.”

Both Kemp and Abrams are raising substantial funds, a clear indication that an expensive media-saturated contest is forthcoming. As of May 10, Kemp had raised $22.4 million, and Abrams $20.8 million, according to Georgia campaign records.

After turning tens of thousands of Georgia residents into first-time voters, Abrams became a national media favorite. She often appears on national broadcast outlets, commenting on voting rights. She has been on the cover of Time, featured in Vogue and Glamour, and last year, as she prepared for a second run as a governor, she was on the cover of Marie Claire.

Her eight romance novels, which were once released under a pseudonym, Selena Montgomery, now have been re-released with her real name plastered in large letters on the dust jackets -- and sitting prominently in bookstores and airport shops around the country. She has made a guest appearance on ABC’s “Black-ish,” and earlier this year, she made a cameo appearance on “Star Trek: Discovery.” On the CBS show, Abrams, who has not been coy about her White House ambitions, played the president of United Earth.

“She cultivated a national profile in 2018 and she has leaned into the support she received,” says Andra Gillespie, a political science professor at Emory University. “Because she has done voting rights work and been a national TV surrogate on the issue, she is being held up as a national pariah by the Republicans.”

Trump, who supported Perdue in the primary, has said repeatedly that Kemp can’t beat Abrams in this year’s general election. Even Kemp, earlier this week, conceded that “Stacey Abrams is a great unifier.” But the current governor said that Abrams’s presence in the race would also unify and encourage Republicans to vote against her.

Abrams is indeed credited with organizing Black voters not just in cities, but also in rural areas of Georgia. She has helped galvanize the state’s booming population of immigrants from Asian and Latin American countries. While serving in the legislature, she launched Fair Fight, a group focused on overcoming voter suppression, and also the New Georgia Project, a voting rights group that says it has helped register nearly half a million people over the past three years.

As the leader of the state’s Democratic party, she has in recent years enhanced her base of support among the party’s county chairs. “She has put together a very powerful voting apparatus here in the state,” says Robert Pratt, a history professor at the University of Georgia and an author of books on race and voting rights. “Stacey found a very effective way to counter the things that were designed to keep people from voting.”

It all caused angst in Republican circles. At this February’s Conservative Political Action Conference in Florida, a panel on “election integrity” that targeted Abrams was titled, “Sorry Stacey, you are not the governor.” The panel included Representetive Jody Hice -- who ran for Secretary of State in this week’s Georgia GOP primary. During the session, Hice said Abrams has “zero evidence” to back her claims of voter suppression in the 2018 race, but admitted that she is a formidable candidate. Abrams and other Democrats in the state, however, continue to insist that some of the state’s laws suppress votes.

“She’s an incredible politician,” Hice said. “And unfortunately in Georgia she’s been given -- literally given -- an enormous political footprint.”